It is extremely refreshing to see a series where a courtroom, a hospital, or a crime scene are nowhere in sight.  Networks don’t often take chances on a series without one of those popular and successful staples as its foundation.  And let’s also get another thing straight – with the exception of the inclusion of songs and musical numbers, there is simply no comparison between Smash and Glee, the first being a serious drama and the latter a comedy that doesn’t take itself too seriously.  The good thing about Glee is that its success helped open the door to other shows interested in including music in its formats. 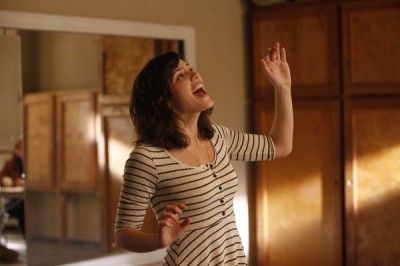 Smash opens, quite appropriately, with a musical number featuring Karen Cartwright [played by Katherine McPhee, American Idol] singing “Over the Rainbow”, which quickly morphs into the reality of a frustrating audition.  We waste no time in meeting another hopeful, Ivy Lynn [Megan Hilty, Wicked], musician Tom Levitt [Christian Borle, Legally Blonde: The Musical] returning from a trip and his house-sitting assistant whose idea for a Marilyn Monroe musical seems to have merit, and composer Julia Houston [Debra Messing, Will and Grace] lamenting that musicals use revivals and movies as their subject matters far too often rather than attempting something new.

Viewers should make note of names and events discussed in the opening sequence, as each of these will become important down the line.  Also make note of how an innocent discussion about Marilyn Monroe plants the seeds of creativity that will eventually take us on the road to creating this musical.

We get to know more about Karen, a mid-West transplant working as a waitress to pay the bills, and struggling as a new talent in town amidst the criticism and rejection.  Katherine McPhee, the runner-up in Season 5 of American Idol, is surprisingly good in this debut in a major acting role, portraying her character very naturally with a sense of vulnerability and innocence, as well as determination to follow her dreams.  Dreams that will not be daunted despite a dinner visit from her parents urging her to go-home-and-get-a-real-job, and a dreams-vs-reality jab that is sure to resound with anyone who has ever wanted to follow a dream of their own.  It also doesn’t hurt that she has a handsome, successful, and very supportive boyfriend. 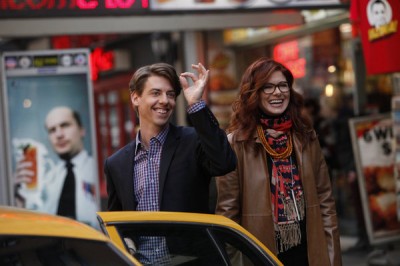 Julia [Debra Messing] has decided to take a year off from work in order to focus on an adoption.  It is clear that her work schedule is very demanding once she takes on a new project, and such a demand into her time would not balance well with the demands of an infant, even though this is something she and her husband want very much.  We begin to see the opposite pulls of family versus work and get a glimpse into the strain and challenges this will create.  But the idea of ‘Marilyn the Musical’ has been planted and the draw is too strong to ignore. 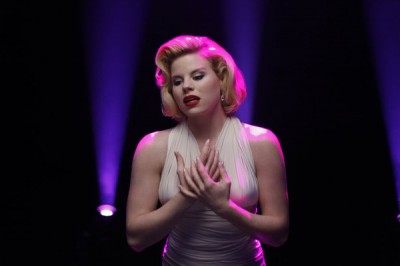 Ivy Lynn [Megan Hilty] is already involved in Tom and Julia’s successful show titled ‘Heaven on Earth’.  Although she is happy to be in the show and working with Tom, she still wants something where she can be the star, and the rejection following her auditions is painful.  As the idea of ‘Marilyn the Musical’ starts to take hold, Tom suggests that Ivy cut a demo for it with a preliminary song created by Tom and Julia.  Of course, it doesn’t hurt that Ivy is blonde and shapely, and an obvious likeness ofMonroe.

An innocent indiscretion by Tom’s new assistant Ellis leaks Ivy’s demo to the public, which has Tom and Julia both furious and terrified at the damage to their potential project before it even has a chance to be developed.  But the positive online response turns viral and sets the wheels in motion for the rest of the season as “Marilyn: The Musical” becomes a reality.

This is just the early introduction and there are still more important characters and situations that come into play.  Oscar winner Anjelica Houston plays Eileen Rand, a potential investor with apparent connections going through a bitter divorce, which threatens all her projects.  There is also the introduction of a brilliant director who no one wants to work with and does not seem averse to using the casting couch.  In addition, we see other hopefuls who don’t quite measure up going through the process, the rehearsals, more auditions, personality conflicts, and trying to balance personal lives in the pursuit of dreams in the fast-paced, cut-throat entertainment world.  The biggest question revolves around who will be cast to ultimately play Marilyn Monroe.  Will it be the trained theater veteran who actually looks like her, or the inexperienced newcomer who dazzles with her innocence, talent, and star quality? 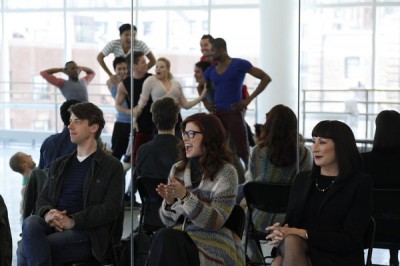 In terms of the musical numbers, we are given the chance to see them in their current rehearsal format as well as what the final product might look like on the stage, as different characters going through the process flash into their mind’s eye imaging the final product.  This is quite a unique and refreshing technique that makes the inclusion of the numbers fluid and appropriate.  The inclusion of the music is there to assist the forward momentum of the drama, without ever becoming the sole focus.  The fact that these numbers have been written and created just for this series is an extra added bonus.  But the driving force of Smash is truly its character-driven drama, with the music serving to enhance the characters and scenes.

In addition to its outstanding cast, Smash is created by Theresa Rebeck [NYPD Blue and Emmy nominee], produced by Steven Spielberg, and features songs by Tony winners Marc Shaiman and Scott Wittman.  It makes its series premiere Monday at 10pm on NBC, against established hits Castle and Hawaii 5-0. And be sure to stay tuned through the closing credits as there will be delicious highlights of the drama for the rest of the season.  Looks like the DVR will be working overtime again!