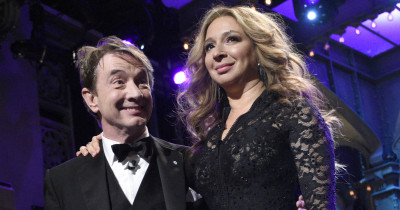 Maya Rudolph, Martin Short and Kenan Thompson will star in the live, hourlong variety series Maya and Martin in Manhattan.

Lorne Michaels will produce the series which is scheduled to premiere on NBC on Tuesday, May 31st (10/9C). Details follow the jump.

Series Is Set to Premiere Tuesday, May 31 at 10 P.M. Immediately Following Two-Hour Season Premiere of “America’s Got Talent”

Kenan Thompson, who has been a cast member on “Saturday Night Live” for 13 seasons, will also star on the show, which will be aired live each week from NBC’s headquarters at 30 Rockefeller Center in New York.

The series will premiere Tuesday, May 31 at 10 p.m., immediately following the two-hour premiere of summer’s #1 reality series, “America’s Got Talent.”

“With their cumulative expertise and experience in live comedy, we couldn’t ask for a better trio to deliver what we know will be a fantastic show,” said Paul Telegdy, President, Alternative and Late Night Programming, NBC Entertainment. “Their respective accomplishments on ‘Saturday Night Live’ and beyond are extraordinary.”

The series will feature sketches that spoof current events, celebrities and topical trends, as well as musical performances. Among comedy circles, Rudolph and Short are considered two of the best sketch performers in the business and this collaboration will create a comedy one-two punch unlike any other on television.

Rudolph was a cast member of “SNL” for eight seasons (2000-07).? On the film side, Rudolph appeared in “Bridesmaids,” which received two Oscar nominations, “Away We Go,” “The Way Way Back” and “Grown Ups.” She co-stars in the upcoming film “Mr. Pig,” which just premiered at the Sundance Film Festival, and lends her voice to the animated film “The Angry Birds Movie.”

Short is both a two-time Emmy and Tony Award winner (leading actor in a musical for the Broadway revival of “Little Me”) and one of the most beloved actor-comedians of his generation.

He first gained prominence as a writer and performer on the legendary Canadian skit-comedy series “SCTV” before moving on to “SNL” for the 1984-85 season. Short’s TV resume is filled with memorable comedic roles and on the big screen, Short has co-starred in such memorable comedies as the “Father of the Bride” franchise and “Three Amigos.”

“Maya and Marty in Manhattan” will be executive produced by Lorne Michaels. Matt Roberts, Erin David, Dave Becky, Marc Gurvitz, Sandy Wernick and John Lieberman will produce along with Rudolph and Short.