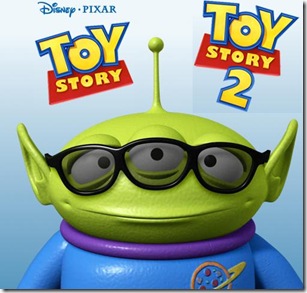 In the case of Toy Story and Toy Story 2, 3-D gives the films a feeling of greater density. Figures seem to be moving in a real – if somewhat different – world. Gags that were funny the first time become brand new again [“I don’t want to use my head!”] and even if they’re toys, their facial expressions are even more effective in 3-D.

It doesn’t hurt that the Toy Story films are classics – they’d both have gotten A+ grades from me if I’d been reviewing them when they were originally released [fourteen years ago for Toy Story; ten for Toy Story 2].Even in 2-D, these are brilliant films and they will last even without 3-D – but when Disney [or somebody] perfects this 3-D process for DVD/Blu-ray, they’ll probably top the sales charts again.

In the meantime, you can judge for yourself how well the 3-D works sometime in the next two weeks.

Note that there is 10-minute intermission between movies – which is not nearly enough time for a theater full of kids to hit the head and replenish their snacks. For those who choose to sit through the intermission, there’s a ten-minute collection of Toy Story Trivia & Treats [the treats are brief original scenes featuring the characters from both movies – and they are great stuff!].