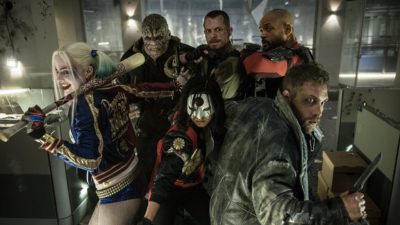 Even though Suicide Squad turned out to be a mess of a film, Warner Brothers should be applauded for going off script in their latest failure. I’ve been vocal about how I hate the entire idea of every DC film being dark and grim just because for some reason the folks in charge think it’s cool and equates to some imagined “realism.”

Writer/Director David Ayer on paper seems perfect for this gig. Training Day, End of Watch, The Fast and Furious and even the WWII tank drama Fury all have a strong anti-hero bent to them and about criminals or good guys who do bad things for the “greater good.” However, other than Fury and I suppose Furious, these aren’t traditional “team” films. Suicide Squad is a film about a team and Ayer seems incapable of scripting such a film.

There’s a lot and nothing going on at seemingly the same time. The first 20 minutes of the film felt like it was written by an amateur and forgets the one basic tenant of filmmaking – show, don’t tell. Every character is introduced via Amanda Waller’s (Viola Davis) voice over telling the audience the who, what, when and why in vignette form, complete with it’s own soundtrack moment.  It was paint by the numbers and painful to sit through.

People who would be at a Suicide Squad movie on opening weekend would most likely know who Deadshot (Will Smith), Harley Quinn (Margot Robbie), Boomerang (Jai Courtney) and Killer Croc (Adewale Akinnuoye-Agbaje ) are. Now Flag (), Katana, Enchantress and El Diablo (Jay Hernandez )? Probably not and the film does a nice job of providing backstory by organically weaving their stories into the overall plot. Most of the team were treated as just background fodder to Smith, Robbie and Jared Leto’s Joker. 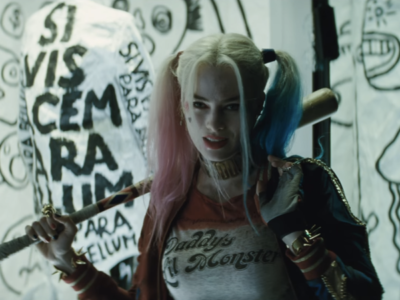 The trio pretty much sucked all the air and life out of the film. I especially hated Leto’s version of the Joker. It’s not an inviable position to play a character that is so well known that it is virtually impossible to do something original with. At the same time the Joker is a “easy” character to play. Just be creepy and psychotic. Easier said than done and Leto seems to be out of his depth. Or maybe it’s not Leto’s performance I hated, it was the entire design of the Joker.

The mannerisms and craziness that fans would expect to see are there, but Ayer completely changes the look and feel of the Joker and turns him into some weird bastardization of the character. Gone is the trade mark psychotic, perma-smile and signature joker look replaced by dumb gold teeth and chains for for some silly “post modern” gangster, punk look.

At times the Joker had the signature smile painted on his hands and at one point penciled it in around his mouth. It was just stupid on so many different levels. You can’t have the Joker’s main squeeze Harley Quinn in the movie without including some form of the mad clown in it as well, but it simply didn’t work. Also the entire backstory to their relationship worked but felt rushed. Quinn is fun, but there’s just too much of her and I’ve never been a fan of her in other mediums, a little bit of her and Puddin goes a long way.

The Suicide Squad is built up to be this covert team of villains who are going to be called in whenever the government needs something dirty cleaned up without involving the world’s heroes. That is how it is in the comics, here, Waller just says the team is required to be a check on Heroes who go bad and to serve as her personal attack force that she can use, abuse and abandon. Their first outing is a very public affair where an entire city seems to be taken over by the Enchantress. I kept wondering in a world of heroes, where are they when another populated downtown area is destroyed? This isn’t a situation that should call for the need of a covert team of villains.

There are several plot holes in the movie, which is the norm, but one of the most glaring centers around an abusive prison guard. It’s as if his story ended up getting cut or was completely forgotten about. On top of all it’s other scripting and directing issues, it’s an ugly movie to look at. Ninety percent of the movie takes place at night or in dark rooms with drab, lighting. I know, it’s “grim and dark,” but can I at least see what’s going on?

I’m really concerned for Justice League and Wonder Woman. This Universe just feels broken and there’s no desire to fix anything that’s plagued it since The Dark Knight Rises. There’s no life to it, everything is grim for the sake of being grim and there’s no color in this depressing world at all. Anytime the brightest and funniest thing is Harley Quinn a psychotic killer and all round annoying character, something is seriously wrong.

I wouldn’t mind seeing this cast and team get another bite at the apple with a better script and director but somehow I doubt this Universe will survive past next year.