Entertainment News for The Rest of Us
Christopher Troilo
Movie Reviews, Movies 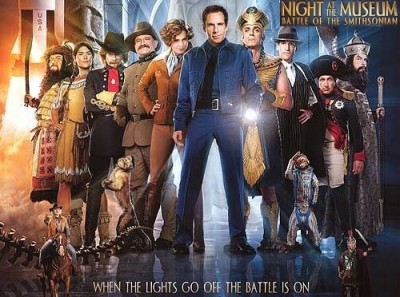 When the first Night at the Museum was released, I thought it looked a little silly to even be fun. Eventually when I rented it, I was pleasantly surprised by its charm. Battle of the Smithsonian definitely continues in this tradition and if anything, takes the creativity to new enjoyable places.

You obviously have to walk into a movie like this expecting it to be ridiculous and the comedy to be slapstick-based at best. But I like to judge movies on what they aim to do- and the goal of this film was to create something entertaining that families can go see this summer, and as a bonus get their kids a little more curious about history. If that’s your barometer, then Night at the Museum: Battle of the Smithsonian is a definite success.

There are no Oscar-winning performances here, and don’t even try to rationalize the plot. What you’re going for here are the special effects, and they are astounding. I was supremely impressed with how faithful the production team was in recreating the various Smithsonian exhibits and museums.  It’s especially to fun to try to see what little things are going on the background, as this time statues and paintings spring to life as well.

The faults of Battle of the Smithsonian are the same ones you’re going to find with any of these types of films: some of the gags fall flat, others go on too long and I’m sure there will be at least one or two characters that you’re going to find annoying. There’s enough cleverness and chuckles however to balance it out.

Battle of the Smithsonian is intended for a very specific audience: families. This is a great movie for parents to see with their kids, especially when you discuss the various characters and locales in your post film conversations. This isn’t a masterpiece of the genre (see anything made by Pixar for that accomplishment), but it’s entertaining, and visually stunning, and it does what it was meant to do.