Bertram Pincus [Ricky Gervais] is a solitary man, rude and generally misanthropic, he lives alone and has a job [he’s a dentist] where he can make sure his patients don’t to him. He even has his office literally a few yards from he works so he can avoid as many people as possible – until he goes in for a routine colonoscopy. After the procedure, he finds himself being assailed by the ghosts of people who had unfinished business when they died – the most insistent of whom, Frank Herlihy [Greg Kinnear], believes that his unfinished business is to prevent his widow, Gwen [Tea Leoni], from marrying a “scumbag lawyer.” Problems arise when Pincus manages to weasel his way into her life via the manner in which an important mummified Egyptian died, and he gets the opportunity to meet Gwen’s finance´. 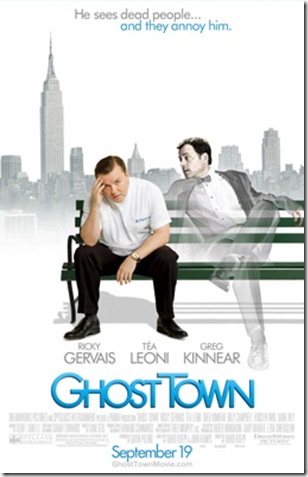 Ghost Town reminded of the superb Truly, Madly, Deeply, though it’s a good deal more superficial. David Koepp and John Kamps’ script works best when director Koepp allows the rhythms of the dialogue to dictate the pacing and when he leads Gervais into some genuinely poignant moments of revelation – regarding himself and how much he’s been missing while he wastes his life. There are moments where the film verges on maudlin, but Koepp manages to walk that line reasonably well throughout.

It’s not a surprise that Gervais made me laugh here. What is a surprise is the deftness with which he handles the poignant moments mentioned above. Both work because he has terrific chemistry with both Kinnear and Leoni. Kinnear plays Frank as a seeming good guy with a surface smarm but takes it to a level where it masks a smarmy guy who projects a superficial good guy over his smarm, but beneath an equally superficial level of smarm [please don’t ask me to say that again…]. Leoni, who has always had terrific comic chops, matched Gervais mood for mood – and she matches his banter equally well.

There’s a scene where Pincus goes off on politically incorrect riff on the Chinese that really isn’t funny, but because Gwen thinks he’s joking, and laughs, it becomes a far more disarming scene than it might have been. Gervais and Leoni work this potentially awkward scene in such a way that we believe because they’ve established their odd rapport from early on. In the end, it’s the chemistry between Gervais and Leoni – and the way they play off each other – that raises Ghost town above the average romantic dramedy – supernatural or otherwise.