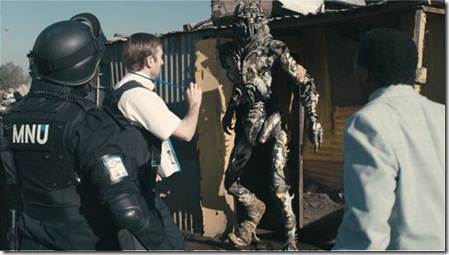 Why? Because they are reviled for being different – and cutting into the available amount of “our” stuff [food, medical supplies, etc.]. The “prawns,” as they are referred to colloquially, are bipedal beings that look like a mash-up of insect and shellfish. The fact that they are being treated the same way that blacks were treated under apartheid seems to be completely unnoticed by the city’s inhabitants – and this is one situation where black and white alike are behaving in a manner that’s all too real.

District 9 follows Wikus Van Der Merwe [Sharlton Copely], an MNU middle management type who is placed in charge of delivering mandatory eviction notices to the aliens. When an empty shack in the middle of District 9 is found to have illegally obtained computers, weapons and a strange tube that splashes Van Der Merwe and begins transforming him into an alien. Suddenly, everything he’s ever believed in gores away and he finds himself being used for weapons experiments [the aliens’ weapons only work for alien DNA]. What happens next makes for a terrific thriller that will keep you on the edge of your seat.

Director Neill Blomkamp [who co-wrote the screenplay with Terri Tatchell] develops the film through both the eyes of Van Der Merwe – especially as he discovers that his only hope is to team up with an alien named Christopher Johnson [Jason Cope] – and those of the cameras that follow his mission to evict the prawns from District 9, and those that project the talking heads on the ongoing cable news channels to bring every moment to the public. 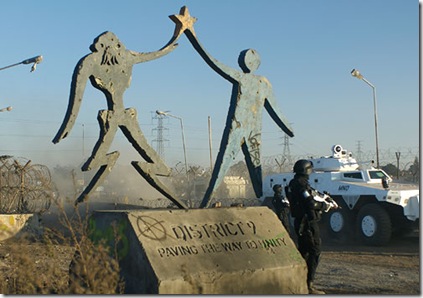 Blomkamp shows himself to be an agile and very specific director. His attention to detail is astounding. The way the aliens use our technology is, well, alien, and every little thing – from the crawl below the announcers on the news stations and the signage about where aliens are and are not permitted – is thought out and well executed.

Because Blomkamp is from Johannesburg, the alien situation – and the band of thugs that take advantage of the prawns – reflect actual behaviors that have been, and are, a part of the way life is lived there. That sense of reality may not be the point of the film, but it brings a power to the film that makes it more than merely another summer science fiction entertainment.

From where I sit, if Blomkamp was asked to direct a HALO movie, now, it would be several steps down from what he has achieved here.

District 9 is a smart, effective thriller that manages to Say Stuff without ever really trying to. Unlike most of this summer’s releases, District 9 will provoke conversations long after you’ve left the theater.