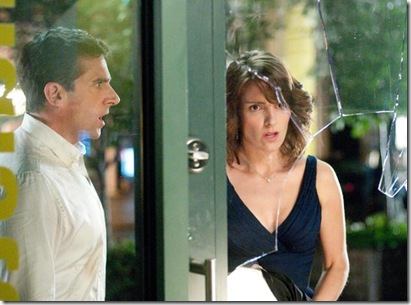 The first mystery is how they’ve managed to become this routine bound family. Phil Foster [Steve Carell] is a tax accountant and Claire [Tina Fey] sells real estate. They deal with two children; jobs that are not the most adventurous in the world; have a regular Friday night date night – when they go to the nearby family restaurant [sans children] and eat the same food; are part of a book club, and are generally not quite happy, but not quite unhappy, either. When their best friends [Mark Ruffalo and Kristen Wiig in hilarious cameos] announce they’re splitting up, Phil and Claire begin to question whether they’re really happy.

When the next date night rolls a round, Claire goes all out to look especially lovely and Phil makes a spur-of the moment decision to take her to dinner at a fabulous Manhattan seafood place – without a reservation. When a couple called the Triplehorns don’t show up, Phil and Claire take their table and, before you know it, this sweet couple find themselves mixed up with crooked cops, a sleazy DA, the real Triplehorns [who really aren’t Triplehorns], honest cops and a security expert who has an aversion to shirts [as Phil complains, who needs muscles on top of their shoulders?].

The subject of all the confusion/action is a flash drive. What’s on it is – and where it might be – constitute the second mystery Phil and Claire need to work out. It leads to threats at gunpoint; the slowest outboard motorboat in cinematic history; breaking and entering; the most peculiar chase sequence I’ve seen in a very long time, and a couple of key sequences in and above a strip club.

Directed by Shawn Levy [Cheaper by the Dozen, both Nights at the Museum], Date Night is a fast-paced, smarter than it appears comedy that does, in fact, reach some screwball highs. The dialogue is mostly above average and – delivered by Carrell and Fey – funnier than it must have looked on paper. Carrell and Fey have terrific chemistry and the script allows us to see their intelligence, wit and charm develop as they are pushed further and further onto kinds of preposterous situations that a good screwball comedy demands.

Jimmi Simpson and Common are fine as the crooked cops and William Fichtner gives the sleazy DA the presence of a snake oil peddler. Taraji P. Henson is excellent as the honest cop who decides the crazy foster couple bears looking into, while Mark Wahlberg provides some heat as Holbrooke, the security expert. James Franco and Mila Kunis also have a brilliant cameo as the real pseudonymous Triplehorns. Leighton Meester [Gossip Girl] is also fun as the Fosters’ blackmailing babysitter, Katy.

Strictly speaking, Date Night takes a bit longer to rev up the pace than I expected, but scriptwriter Josh Klausner does use the time to give us a lot of details of the Fosters’ lives, which makes us more appreciative of their pluck and ingenuity as things go to hell all around them. Levy makes sure that the detail never overwhelms the humor. In the end, though, Date Night depends on our believing in the Fosters as real people. Carrell and Fey succeed in making us believe that and that makes the movie work.