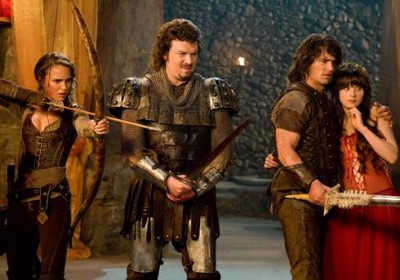 James Franco is a weird actor. He’s one of those guys who seems like he’d be cool to hang out and have a beer with, but as an actor always lacked that certain something. With Pineapple Express he seems to hit upon the Sean Penn stoner gimmick which he milks again with the adventure/comedy Your Highness. I don’t know who Chi McBride is or why he’s even starring in a movie, but he and Franco are good together in this.

In Your Highness Franco and McBride are brothers Fabious (Franco) and Thadeous (McBride) both Princes’, although only Fabious is the apple of his father’s eye. When Fabious’ bride Belladonna (Zooey Deshanel) is kidnapped by an evil wizard the King orders Thadeous to go with his brother on a quest to find her.

The problem with this movie is, it actually works fairly well as an action/adventure movie, but falls short in the comedy department. The writers didn’t seem to be trying that hard to be funny. Most of the jokes in the beginning begins and ends with them using modern profanity in an “historical” piece or giving their characters funny sounding names (like Thadeous and Fabious) It’s cute the first few times, but hardly laugh out loud funny. Part of the problem with this movie is once they decide to do something they run it into the ground. There’s a moment towards the end when a character walks around with a giant Penis as a necklace – it was cute the first time, but then we had to watch this character with the Penis around his neck for the rest of the movie. 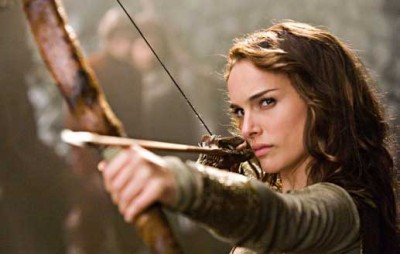 As a quest movie, it works surprisingly well and David Gordon Green (Pineapple Express) does a competent job with the action scenes that fluctuate somewhere between low-budget and big budget set pieces (clearly filmed on a low budget). McBride’s script has some first act problems and starts to feel like the movie isn’t going to go anywhere. Once the quest starts the pacing picks up and everything else falls into place. Recent Oscar winner Natalie Portman gives the story a big push forward when she finally makes her appearance as a kick ass warrior out for revenge.

Your Highness fails to please as a comedy, but it was fine as a low-budget adventure movie.