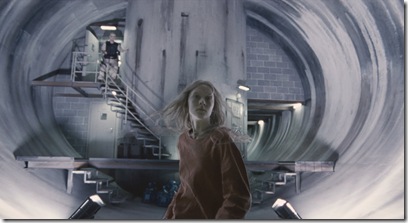 The film opens with Hanna [Saoirse Ronan] hunting a deer with a bow and arrow. While she’s dressing the animal, her father, Eric [Eric Bana], appears behind her. ‘You’re dead,’ he says. A furious fight ensues and Hanna wins. Her prize? Dragging the deer home by herself.

In rapid succession, we learn that he has been training her to be ready to kill someone named Marisa [Cate Blanchett]. Her expertise with a bow, her fighting skills – even the several languages in which she has become fluent – all are in service of this mission. She has a cover identity and home, but they are just words to her. For all of her skills, she may be ready to kill, but she is not ready for the real world.

Once she flips the switch that activates the beacon that will lead to her meeting Marisa, she is taken into a world she can barely conceive of. Her escape from a CIA bunker under the Moroccan desert leads to a meeting with a real family, with a sixteen-year old daughter, Sophie [Jessica Barden], whom she befriends – even though each finds the other to be completely alien. Her brief time with the family shows her something else she’s never seen before – and she leaves them rather than put them in danger.

Marisa is a clamped down, all-business CIA operative who knows Eric from a project that took place before Hanna was born. There are reasons she wants Hanna – and reasons she wants Eric dead. Despite Hanna’s resourcefulness and Eric’s elusiveness, Marisa keeps her temper mostly under control, but we can tell it’s only a matter of time before she explodes [figuratively speaking]. When the end comes, it is with a bookend scene that wraps up every loose end except one – and that one is a killer… 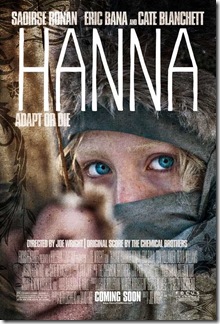 Hanna was written by Seth Lochhead and David Farr. Together, they’ve drawn from the works of the Brothers Grimm – the film reminds of Red Riding Hood, Hansel and Gretel [think gingerbread] and even, a bit, of Snow White. It includes classic tropes like revenge, unexpected rescues, a couple of would-be Prince Charmings, a Huntsman [or three] and even a Big Bad Wolf/Evil Queen/Wicked Stepmother.

As directed by Wright, Hanna is a beautifully shot film that switches deftly between hectic action sequences and measured looks at the environment. The pace is quicker in urban settings, but in terms of most action films, it is still more deliberate than adrenaline-infused. Cinematographer Alwin H. Kuchler takes his time revealing the stark beauty of northern Finland, or even the impressiveness of the Moroccan desert – but is just as deft at shooting full tilt action.

As we get to know the characters, we become aware that Eric has trained Hanna because Marisa is a person whose death would be both a benefit and a relief to the world at large – even if no one ever knew about it. The secret that exists behind the relationship between Eric, Hanna and Marisa is teased in a strange medical chart Hanna comes across while trying to escape from the Moroccan bunker – and its revelation really make the final showdown not only logical, but inevitable.

While I was one of those who thought Hailee Steinfeld should be cast as Katniss Everdeen in the upcoming Hunger Games, Ronan shows that, beyond a shadow of a doubt, she could handle that role with style. Her Hanna is fierce, intelligent and capable – but there’s a vulnerability to her that appears in moments with Sophie’s family, and shows her to be not only a complex character, but also constantly learning and evolving.

Bana and Blanchett are almost equally as marvelous as Ronan, but their characters are more closely aligned to fairytale tropes and, as a result, not quite a complex. Still, they do more than is required to make Hanna work – they make enough of their characters that Hanna [the film] becomes believable.

Hanna also gives us a fairytale ending – but it’s more a Brothers Grimm ending than a Disney one. Right to its conclusion, this is an action movie that keeps us thinking.