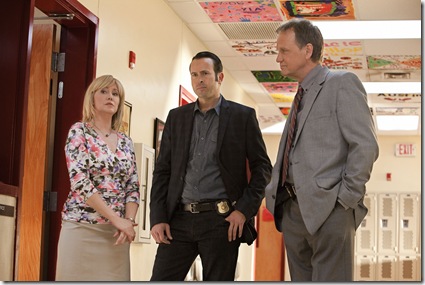 Lt. Tanya Rice [Alfre Woodard] comes from the other side of the city, with her notions of daily status reports filed in the computer, sharing information and calling in status reports while working a case. She and Hendricks get off on the wrong foot when she orders him and Whitehead to take on the case of a sweet old lady who won’t [or can’t speak] – and has beaten and abused. It’s a case that detectives wouldn’t be assigned, but Rice is firm and Hendricks gets emotionally involved when they turn up evidence that she’s Daisy Collins, a legendary DJ who built radio station WHER from the ground up.

Various suspects, including her son, fail to pay off until Hendricks disobeys a direct order to drop the case and take the weekend off and he ignores her to search Collins’ home one last time.

Memphis Beat is more a mood and character piece that a procedural. Hendricks is a bit of a maverick, whose hunches usually pay off – and everyone in the precinct backs Whitehead when he explains this to Rice. The series is shot with a lot of shadows and heightened lights, with a score that echoes the Memphis soul sound without necessarily calling specific hit songs to mind.

Hendricks is a good, if unorthodox, cop who loves his job, his city his mother [Celia Weston] and his music. Lee plays him with a restrained ferocity that emphasizes his passions – except when he unleashes them for whatever purpose – an investigation, a gig, making sure the guy who’s getting too close to his mama is a decent person.

Hennings plays Whitehead as the laid back partner to the bundle of barely controlled energy that is Hendricks. They make a great team. D.J. Qualls plays a beat cop, Davey Sutton, who worships Hendricks and would like to think of the detective as his mentor – even if that’s a stretch [Sutton is not the most competent of copes, but he’s trying hard].

In Rice, Woodard may have found a signature role for her resume. Rice tells Hendricks a bit about her background – a bit of background that lets him know that she’s there and she’s not going anywhere so they’d best find a viable way to work together. Woodward makes Rice warm, firm and capable of dealing with any amount of unorthodoxy that her new charges want to direct her way.

A clue to the overall feel of the series and the relationships that are on display is contained in the pilot’s title, That’s Alright Mama. Memphis Beat is a soulful winner. And Lee does his own singing. This summer, Memphis is the place to be.