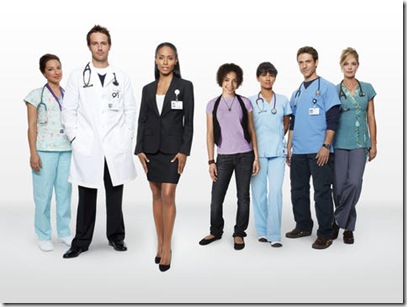 The second season of HawthoRNe [TNT, Tuesdays, 9/8C] opens with Morrisey [James Morrison] informing Chief of Surgery Dr. Tom Wakefield and Director of Nursing Christina Hawthorne [Jada Pinkett Smith] that Richmond Trinity is being shut down, then cuts to three months later with Tom and Christina seeing the hospital’s last patient off and then having to take a gunshot victim to James River, where several of the former Richmond Trinity staff are now working.

In the ER, both Tom and Christina are impressed with Dr. Steve Shaw [Adam Rayner], who is calmly professional in getting the gunshot victim ready for the OR.

Before the gunshot victim is even in the OR, Christina is butting heads with James River’s head ER nurse, Gail Strummer [Vanessa Bell Calloway] over a woman who is suffering abdominal pain and has been waiting for over four hours. Ray Stein [David Julian Hirsh] is still trying to find acceptance as a male nurse, but he’s also using his after hours relationship with dragon lady Dr. Marshall [Anne Ramsey] to try to get her to be less of a dragon lady when dealing with James River’s nurses.

Richmond Trinity’s most insecure nurse, Kelly Epson [Vanessa Lengies], finds a medication error for a young black boy and has to inform surgeons before they begin work grafting new skin to his badly burned arm – which angers both Strummer, and the nurse [Sara Gilbert] who made the error.

All is not hopeless at James River, though. Besides Dr. Shaw, there is also the most efficient ER clerk in the known universe, Marcus Leeds [Collins Curtis Pennie] who also impresses Christina – both for his competence and enjoyment of doing the job well.

While the second season premiere of Hawthorne is leagues ahead of its first-season opener, the move from Richmond Trinity to James River is a mirror of the shutdown of Mercy West and the influx of newcomers to Seattle Grace on Grey’s Anatomy. In this case, the more prestigious hospital closes down for financial reasons and the best of its staff finds themselves in a hospital generously referred to as a pit.

No Excuses is a solid episode of medical drama but HawthoRNe still hasn’t forged a singular identity of its own. It still feels like a riff on Grey’s Anatomy from the point of view of the nurses. Technically, it’s well enough written and shot that its influences don’t weigh on it too heavily, but they’re still too noticeable for the series warrant the kind of real time viewing devotion that Grey’s gets. It does, however, warrant a periodic visit to see how things develop – and the premiere is certainly entertaining.