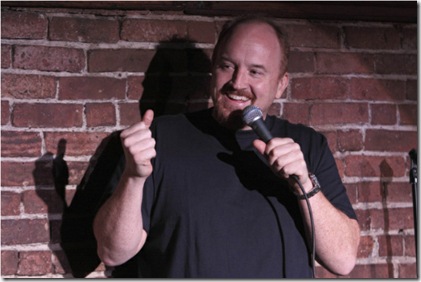 Trust FX to come up with half-hour, single camera comedy that actually fits the style of stand up comic Louis C.K… Louie [Tuesdays, 11/10C], as has been noted in other areas, has a format that is reminiscent of Seinfeld – it generally opens and closes with bits from Louis’ stand up performances. That’s not entirely accurate though, because no episode of Louis follows the exact same format as any other – and yet it kinda does. Allow me to explain…

Louis C.K.’s stand up routines [which are anything but routine, to begin with] actually punctuate each episode. While that means that they open and close most episodes, one of the four eps sent out for review opens with what might be a standard teaser if it weren’t based on the etymology of the word ‘faggot.’ Not only that, but no two episodes have the same format in terms of A-stories and B-stories. Instead, they are composed of slices of Louis’ life as seen through his unique point of view.

Thus, there can be two, three, or more [let’s call them] segments. Each of these segments is separated from the others by a bit of stand up that either connects back to, or leads into a segment – sometimes, in an odd way it might do both. So, now we’ve left behind any other possible resemblance to Seinfeld – and we haven’t even gotten to the language warning. Yup, if you have a problem with those seven words you didn’t used to be able to use on TV, then you’ll have a problem with Louise – the rest of us will enjoy.

We will enjoy because Louis C.K. turns his unique version of sad sack into an Everyman and just throws his take on stuff out into the universe, knowing that he will connect with somebody, because it’s absolutely certain that someone out there will have had similar experiences – and most of those people will laugh because they relate and because Louis gives them a way to change their own perspective.

And make no mistake about it – if Seinfeld was about ‘nothing,’ then Louis is about everything! There are no holds barred here. If it’s happened to him – or it’s crossed his mind, even obliquely – then Louis C.K. will toss it into the mix. Being a divorced, single father of two girls, you know that he’s got to have a wealth of experiences to draw on.

Thus, Marriage as time machine [but the kind that takes the actual amount of time to get you there – you’ll understand when you see that segment]; the reunion with his first major crush in middle school; the poker game that gives us the etymology of ‘faggot,’ and the disastrous playdate.

Louis is, however, a work in progress. Some of the segments seem a bit forced and Louis’ delivery in the segments isn’t nearly as animated as in his stand up – though he’s a much better actor now than he was in HBO’s Lucky Louis. On the plus side, the laughter we hear onscreen is genuine laughter from his stand up work. The segments are totally laugh track-free. Whatever else may work [or not] in the series, the audience is given credit for knowing what’s funny.

Given a few more eps [and, since this cable, there will be more], Louis will likely find the kind of sweet spot that Louis C.K. seems to hit more often than not in his stand up work. Even now, the show is funny enough to ensure my continued interest – and there aren’t a lot of comedies [on network or cable] that do that anymore.