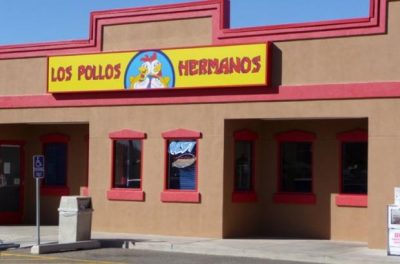 Following the successful grand unveiling at SXSW, the arrival of Gus Fring’s famous meth industry chicken franchise/front will debut in Los Angels on March 29th/30th and follow that up with two days in New York – April 9th/10th.

ON THE HEELS OF THE GRAND UNVEILING AT SXSW, GUS FRING’S FAST FOOD CHAIN WILL BE COMING TO: LOS ANGELES ON MARCH 29th AND 30th AND NEW YORK CITY ON APRIL 9TH AND 10TH

NEW YORK, NY – March 27, 2017 – On the heels of a successful unveiling at SXSW, AMC announced today they have partnered with Citizens Parking to bring the Los Pollos Hermanos pop-up restaurant to Los Angeles and New York City. Fans on both coasts will have the opportunity to enjoy Gus Fring’s famous curly fries in Los Angeles on March 29th and 30th and New York City on April 9th and 10th. Citizens Parking, one of the largest parking companies in the United States, will host the pop ups at popular outdoor parking lot locations in both cities. Season three of “Better Call Saul” premieres on AMC on Monday, April 10, at 10pm ET.

Season three of “Better Call Saul” follows the twists and turns of Jimmy McGill’s devolution toward Breaking Bad’s Saul Goodman – Albuquerque’s most notorious criminal lawyer.  Six years before he meets Walter White, Jimmy is a more or less law-abiding, small-time attorney hustling to champion his underdog clients, build his practice, and somehow make a name for himself.   As the new season begins, the repercussions of Chuck’s scheme test Jimmy and Kim’s fledgling law practices and their romance as never before.  This imminent existential threat presses Jimmy’s faltering moral compass to the limit.  Meanwhile, Mike searches for a mysterious adversary who seems to know almost everything about his business. As the season progresses, new characters are introduced and backstories are further illuminated with meaningful nods to the Breaking Bad universe.

Founded in 2014, Citizens Parking is one of the largest parking companies in the United States. Citizens Parking is committed to changing the way people think about parking. Their mission is to revolutionize the experience of parking for all citizens, and to do so with integrity, loyalty and distinction. Citizens Parking offers a diverse portfolio of major parking brands, including Lanier Parking Solutions, Icon Parking Systems, Park One, AmeriPark and Quik Park, which collectively include over 1,100 locations, 6,800 employees and 320,000 parking spaces across the United States and Puerto Rico. For more information about Citizens Parking, please visit www.citizensparking.com.