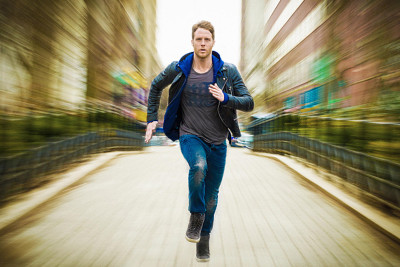 The series premiere opens with Finch being chased and eluding capture by gauging the proper moment to run through traffic on a busy street and judge exactly where a subway train is going to stop so that he can use it to evade one specific gun-toting woman.

Then, following a voiceover – ‘Hi, My name is Brian finch and the first thing you should know about me is that I didn’t do anything wrong. Well, not the kind of wrong that leads to having a gun in your face. I’ll explain…’ – we scan through Brian’s life of never quite managing to achieve anything. Even his one talent – music – never panned out for him.

We finally arrive at a recent family dinner, where his father Dennis (Ron Rifkin) collapses. His dad gets worse and no one can figure out what’s wrong. In the meantime, Brian is working as a temp and his latest job is a filing job at a bank that’s expected to take him a couple of weeks.

At work, he discovers that Eli, the guy with whom he formed his first band, is the company’s boy wonder. Over lunch they reminisce and Eli gives him a clear tablet. Like a neuro-enhancer, he says – only a lot better.

Brian finally decides what the heck, and takes it. Suddenly he’s awake and his mind is working like it’s never worked before. He can do stuff – play the guitar well enough to make Clapton dizzy; organize and achieve (that two-week filing job? Done in a couple of hours – and organized beyond any possible need); remember everything he’s ever learned, done or experienced (including being in his mother’s womb).

He even rips through his brother’s medical texts and diagnoses his dad before effects of the pill wear off – but when he goes to see Eli about getting more, he finds him dead. Even better/worse, he finds himself framed for the murder.

Fortunately, he finds Eli’s secret emergency stash and we’re up to the moment Brian evades capture by the FBI.

The woman with the gun is FBI Special Agent Rebecca Harris (Jennifer Carpenter) – think Dexter’s Deb, with a better job and no drug problem. Her boss, FBI Special Agent in Charge Nasreen Pouran (Mary Elizabeth Mastrantonio) is a smart, no-nonsense type, and her office has been investigating NZT, as the drug is called. It turns out it has a nasty side effect – continued use fries the user, almost literally.

So, Finch has to evade capture and find the murderer – and not die. Which is where the now Senator Edward Mora (Cooper, who will recur on the show) comes in.

The action is well choreographed, the script is smart and witty, and the production is first class. McDorman is tremendously likable and has a deft touch with humor while showing some solid dramatic chops.

The buzz on the pilot was extremely good from the moment it was shown at upfronts and the reason for that is very apparent – it’s terrific. Will the show hold up over a full season? That remains to be seen – but the premiere is one of the best hours of TV you’re going see this fall.