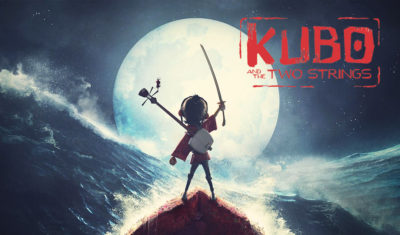 The story follows the titular Kubo (voiced by Art Parkinson, a one-eyed boy with a talent for magical storytelling – playing his shimsen (a three-stringed, guitar-like Japanese instrument) to make sheets of paper turn into origami equivalents of characters in his stories. 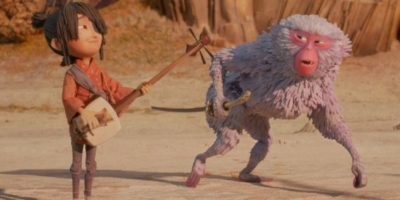 He lives with his mother in a cave on a high cliff just outside of a small town. She seems to be suffering from a form of intermittent memory loss, though she does remember to tell Kubo he must never be outside after dark – otherwise his grandfather, the Moon King (Ralph Fiennes), would find him and take his remaining eye.

Out of a desire to find, or at least communicate with his father, Kubo tries to use a traditional method of contacting souls (a paper lantern that would fill with his father’s soul), but it doesn’t work and Kubo discovers that his mother was right to warn him when ghostly twin sisters (voiced by Rooney Mara) appear.

His mother saves him, but, in doing so, dies – leaving him with a quest: find three pieces of magic armor to help him defeat the sisters and the Moon God. 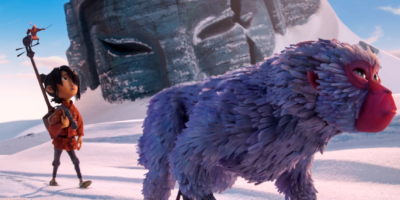 To help him, she uses the last of her magic to bring to live a monkey charm she’s always had him carry. Monkey (Charlize Theron) and Kubo are joined in their quest by an amnesiac samurai beetle (Matthew McConaughey).

Kubo & the Two Strings is an amazing achievement. Not only is the story simultaneously intimate and mythic, it’s filled with characters who make us care about them. Despite the danger he’s in, Kubo remains a kid, taking in simple joys like playing in the snow.

Monkey is tough but caring and very, very suspicious of anything she can’t understand immediately (like a gigantic amnesiac samurai beetle, for example).

Beetle is blessed with amazing fighting skills, but if he rolls over in his sleep, he needs help (beetles aren’t so good on their backs). He’s also a bit of a talker – sharing the movie’s best lines with Monkey.

Each of the three has a secret – even if only one of them is aware of their own – that plays into the story in pivotal ways at key moments.

Written by Marc Haimes and Chris Butler (from a story by Haimes and Shannon Tindle), Kubo and the Two Strings is directed by Laika president Travis Knight (his first film as a director). 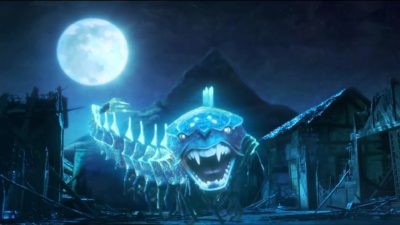 Knight brings the story to life with magical stop-action animation based on origami and the Japanese style of wood block prints. There is literally nothing like it – it takes a unique style to tell a unique tale.

Knight doesn’t over indulge in action sequences, but neither does he ever let the film get emotionally squishy. He knows how to tell a story even better than Kubo (who has a problem with endings…), and isn’t afraid to let his characters be emotionally true.

In terms of the actual animation, Kubo is amazing. Any director – live-action/stop-action/hand drawn or CG animation – will tell you that the hardest things to deal with are water and animal fur/hair/scales. Kubo has all of them – and they are done remarkably well.

This is Laika’s greatest technical achievement to date – and one of the best films of the year. Go! See it!