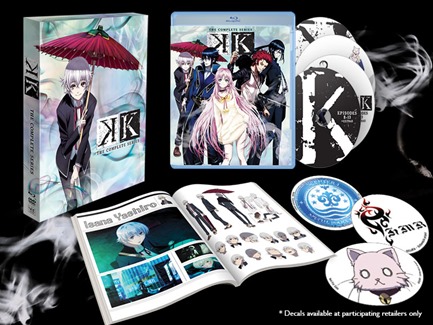 K, the anime thriller that finds a case of mistaken identity ruining (and threatening) the life of teenaged student Shiro, is the first VIZ Media title to get a Blu-Ray+DVD Combo Pack release. While it will also be released as a 2-Disc DVD set, the extras (check out a complete list after the jump) will make the Combo Pack something of a collector’s item.

K will be available in stores, in both formats, on Tuesday, February 125th.

Savor The Complete Series About A Case of Mistaken Identity That Embroils An Easygoing Teenager In A Deadly War, Along With An Array Of Special Bonus Material

San Francisco, CA, February 20, 2014 – The wait is finally over as VIZ Media, LLC (VIZ Media), the largest distributor and licensor of anime and manga in North America, prepares to release the anime action thriller – K – as a special Limited Edition Blu-ray/DVD combo pack and also as a standard DVD edition on February 25th, 2014.

The 13-episode series is rated ‘TV-14’ and will debut as a 4-Disc Limited Edition Blu-ray/DVD combo pack with an MSRP of $69.99 US/CAN. The standard edition 2-disc DVD edition will be offered at an MSRP of $44.82 US/CAN. An extensive collection of bonus material also makes this release a must-see for anime fans.

K introduces viewers to Shiro, an easygoing teenager content with just being a student – until his seemingly perfect life is suddenly halted when a bloodthirsty clan, glowing red with fire, attempts to kill him in the streets. Unbeknownst to Shiro, he is suspected of murdering a member of their clan and will need a miracle to escape their vengeance. Miraculously, a young man named Kuroh Yatogami swings in and aids Shiro in his getaway, only to reveal afterward he’s also after Shiro’s life. Now a hunted man, Shiro will have to evade the clans of seven powerful kings and desperately try to prove his innocence – before it’s too late!

“K debuts as VIZ Media’s first-ever Limited Edition Blu-ray/DVD combo pack title, and with its multilayered story, engaging characters, and beautifully rendered animation, this series is guaranteed to delight anime fans across North America,” says Charlene Ingram, VIZ Media Senior Manager, Animation Marketing. “We’ve also packed this release with an array of fun extras that will give viewers the chance to dive into the amazing world of K even more. Don’t miss the release of this kinetic action-filled drama debuting this month!”

For more information on K and other animated titles from VIZ Media please visit http://www.viz.com/anime.