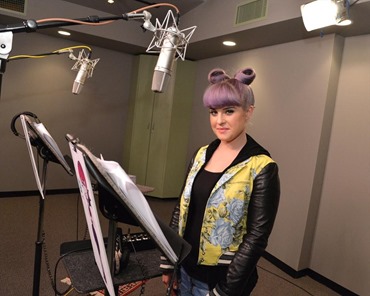 KELLY OSBOURNE JOINS THE CAST OF DISNEY’S "THE 7D," A CONTEMPORARY, COMEDIC TAKE ON THE SEVEN DWARFS, PREMIERING THIS SUMMER

Kelly Osbourne has joined the cast of Disney’s "The 7D," an animated series that delivers a comedic new take on the Seven Dwarfs. Produced by Disney Television Animation, the zany and broadly appealing series will be presented on three Disney TV platforms: Disney XD, Disney Channel and Disney Junior, beginning this summer.

Ms. Osbourne, who shared the news with fans via her Twitter account today, said, "It may surprise some to learn that I grew up watching Disney Channel, so playing a character in a Disney cartoon is beyond exciting for me." She continued, "I’m having a blast voicing Hildy, who I’ve now come to think of as my alter ego – she is my Sasha Fierce. The role has taught me so much about acting – and Hildy’s a tough one to keep up with, so I wear workout clothes to recording sessions because I jump and move around to really bring her to life."

Set in the contemporary and whimsical world of Jollywood, "The 7D" story finds the 7D – Happy, Bashful, Sleepy, Sneezy, Dopey, Grumpy and Doc – hard at work helping the quirky Queen Delightful (voiced by Leigh-Allyn Baker of Disney Channel’s "Good Luck Charlie") keep her kingdom in order. Osbourne will voice the role of Hildy Gloom, a novice witch who, together with her warlock husband Grim (voiced by Emmy-nominated Jess Harnell of Disney Junior’s "Sofia the First" and "Doc McStuffins"), haplessly plot to overthrow the kingdom.

Meme master Parry Gripp, the creative force behind such viral videos as "Hamster On A Piano (Eating Popcorn)" and "Baby Monkey (Going Backwards On A Pig)," is the songwriter and composer for the series and also performs the theme song.

Television personality, host, fashion designer, singer and actress Kelly Osbourne shot to notoriety after appearing with her famous parents and younger brother in the Emmy Award-winning reality television series "The Osbournes." The youngest daughter of heavy metal rock legend Ozzy Osbourne and Sharon Osbourne, television host, author and voice of Mama Hook in Disney Junior’s "Jake and the Never Land Pirates," Osbourne is a fashion correspondent for E! Network and also serves as co-host for the network’s popular "Fashion Police" series. She competed on season nine of ABC’s "Dancing with the Stars" and placed third with her partner Louis van Amstel.