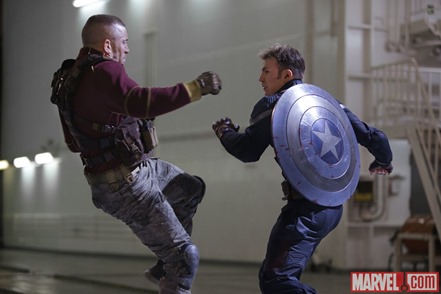 Summer blockbuster season seems to come earlier every year, but thanks to Marvel Studios, that doesn’t have to be a bad thing. Captain America: The Winter Soldier takes the Star-Spangled Avenger and places him in the middle of a tension-packed conspiracy movie that feels like something out of the ‘70s – a tone choice that is enhanced by the presence of Robert Redford, who starred in one of the best. The result is something I tend to think of as The Three Days of the Captain.

The Winter Soldier opens with Steve Rogers jogging around the pool in front of the Lincoln Memorial and lapping Sam Wilson (Anthony Mackie) not once, but three times – turning the line ‘On your left’ in a moment of comedy gold (it will take on a slightly more poignant layer later). During the conversation that follows, Rogers is called away to rescue SHIELD agents on a hijacked ship, with Natasha ‘The Black Widow’ Romanov (Scarlett Johansson).

The rescue sets up the odd couple friendship that has developed between the two, with Natasha try to set Steve up with various colleagues while, at the same time, firmly re-establishing Captain America as the guy who always tries to do the right thing and the Black Widow as someone who will do anything on a mission. She breaks off from what Cap presumes is the mission (to save the SHIELD personnel on the ship), to download something off the ship’s computer.

Just as an incidental, the Algerian hijackers are led by Georges Batroc – known to fans of the comic as Batroc the Leaper for his mastery of the French martial art, savate – whom Cap dispatches fairly quickly once Batroc accuses him of hiding behind his shield. Lesson One: don’t piss off the Captain.

Back at SHIELD HQ, Cap questions Nick Fury’s (Samuel L. Jackson) decision to give Natasha a separate mission that seemingly placed more value on some-thing as opposed to the hostages – which leads to Fury giving him more information than absolutely required about a project involving three upgraded heli-carriers and an program, Operation Insight, that could identify and eliminate evildoers before they could even act. Cap being Cap, he has the expected reaction – horrified disbelief which leads Fury to visit his old friend, Alexander Pierce (Redford), a co-head of SHIELD and member of the World Security Council (remember them from The Avengers?). 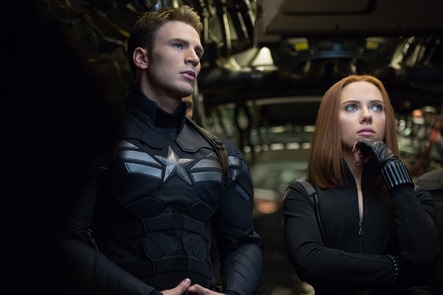 Shortly thereafter, Fury is attacked and we meet the Winter Soldier for the first time. It does not go will for Fury but it does propel the film into a darker and more action-packed tone.

Cap grabs the flash drive Natasha acquired on the ship and before you can say Captain America, Cap is on the run – aided by Natasha – and trying to figure out what’s going on. What’s going on turns out to be a massive conspiracy involving Hydra – and the first utterance of ‘Hail, Hydra!’ comes from a familiar and completely unexpected figure and we realize just how deep the conspiracy runs.

That’s a lot of stuff going on, and it just gets deeper and deeper as we go – eventually leading to a living computer (in a lovely callback to The First Avenger); the secret behind The Winter Soldier, and the entrance of Sam ‘The Falcon’ Wilson, action hero (to say that Mackie brings an easy charm to Wilson would be an understatement).

Directors Anthony and Joe Russo may have gotten their professional start in sitcoms (Arrested Development and Community being the most noteworthy), but they balance all the disparate elements of The Winter Soldier like they’ve been doing it forever. Working from a script by Christopher Markus and Stephen McFeely, who wrote The First Avenger, the Russos deliver action sequences that might intimidate Michael Bay and character moments that approach Christopher Nolan levels.

The action sequences – especially during the rescue at sea – really set up the styles of Cap and Natasha: he’s kind of a refined street fighter/pugilist; she’s an advanced martial artist. He slings his shield with an instinctive grasp of geometry, while she has her Widow’s Stingers that closely resemble tasers in their effect. He’s straightforward; she’s wily and more than a little devious. As much as The Avengers was a group of heroes who should never be in the same room together, The Winter Soldier showcases Cap and Natasha as opposites who actually complement one another.

Like most Marvel movies, The Winter Soldier does action exceptionally well, but it’s the moments that showcase character that make us give a damn about the fighting and explosions. The Russos bring shadings to the characters. In the case of Natasha, we see much more of her intelligence and emotional life – the way she can be tortured by her past, yet still find moments of fun in the midst of chaos. Johansson, who always soars when she has good material to work with, excels in the quiet moments here. 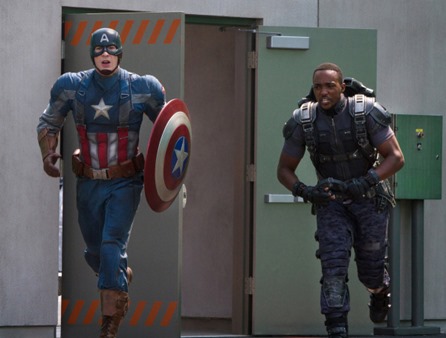 In the case of Cap, we see a soldier and decent human being who will kill if he has to but will never enjoy it – and Evans, who is as perfect a case of casting as Chris Hemsworth was for Thor, lets us see the pain that having to hurt others (even bad guys) causes for him. The nature of the twenty-first century world he’s in finds him looking for, and failing to find the kind of solid, right and wrong he thought he knew in the ‘40s. He knows who he is, but not how that should work in this new world.

Of course, the presence of Robert Redford in The Winter Soldier deepens our acceptance of the conspiracy thriller it is at its heart – and he gives a performance that brings every bit of star power and skill to the fore. He doesn’t really have to do blockbusters, or any kind of movie, so his presence also serves to underscore the quality of the script and his belief in the project. Because of him, everyone has to bring their A-game, too, and that results in a superhero movie that transcends genre.

Captain America: The Winter Soldier is an immersive experience – its 3D conversion is lovely and adds to the film’s scale immeasurably. But while we’re being blown away by the movie’s scale and drawn into the way the characters develop, we’re also thinking – thinking about the possibility that technology might be getting out of hand, or that those who wield new technologies might not be the right people to do that; thinking about whether the demand for security outweighs the right to freedom.

We’re also being sucked into a whirlwind of superheroic proportion that is entertaining as all hell. Plus (and if you knew the Russos background, you had to know it was coming) a Community star cameo that rivals Stan Lee’s appearance for a moment of unexpected brilliance.

The two tags during and after the credits are extremely good, too – among the best so far. Stay to the end. It’s definitely worth your time.