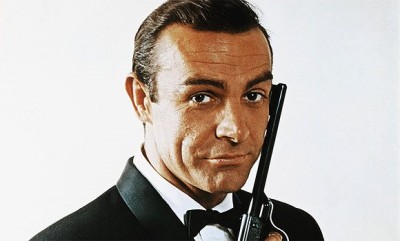 How do we celebrate Thanksgiving? With turkey and dressing, mashed potatoes and gravy, pumpkin pie and whipped/ice cream and, of course, eight helpings of 007!

Syfy is shaking things up on Thanksgiving weekend with a James Bond Marathon. Beginning at 6am(5C) on Thursday, November 26th, the network kicks things off with the first Bond of all, Dr. No – followed by all four Pierce Brosnan Bonds (GoldenEye, Tomorrow Never Dies, The World is Not Enough and Die Another Day).

The 007-fest kicks off at 6:30AM (ET/PT) on Thanksgiving Day, Thursday, November 26, with the first Bond movie, Dr. No, starring Sean Connery, followed by all four of Pierce Brosnan’s films: GoldenEye, Tomorrow Never Dies, The World is Not Enough and Die Another Day.

For those viewers still on the couch in a tryptophan semi-coma, Bond continues Friday, November 27 with Daniel Craig in Casino Royale at 4PM (ET/PT) and Skyfall at 7PM (ET/PT).