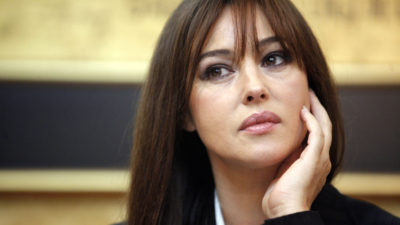 Monica Bellucci will be playing a major part in the third season of Amazon Prime’s Mozart in the Jungle- which begins production later this month.

She will play an iconic opera star who Rodrigo to conduct her grand return performance. Further details follow the jump.

Monica Bellucci (Spectre) will guest star in the third season of the Golden Globe award-winning seriesMozart in the Jungle. Bellucci will play Alessandra – an iconic opera star who will become Rodrigo’s (Gael Garcia Bernal) next great collaborator. Alessandra is as famous for her passionate performances as she is for her erratic life off the stage. After years away from the spotlight, she enlists Rodrigo to conduct her grand return performance.

Starring Garcia Bernal, who was awarded the Golden Globe award for Best Actor in a Musical or Comedy Series, and Lola Kirke (Gone Girl), Mozart in the Junglewill begin production later this month and will continue the story of the talented musicians who perform and live with passion under the baton of its spirited conductor – Rodrigo. Executive Produced by Roman Coppola (Moonrise Kingdom), Jason Schwartzman (The Darjeeling Limited) and Paul Weitz (About a Boy), season three will see Rodrigo and many musicians take their talents to Europe.

Based on the critically acclaimed memoir Mozart in the Jungle: Sex, Drugs & Classical Music by Blair Tindall, the series draws back the curtain at the New York Symphony, where artistic dedication and creativity collide with mind games, politicking and survival instincts. Along with Bernal and Kirke, Mozart in the Jungle also stars Saffron Burrows (Agents of S.H.I.E.L.D.), Malcolm McDowell (The Mentalist), and Bernadette Peters (Smash).

Seasons 1 and 2 of Mozart in the Jungle are available for Prime members using the Amazon Video app for TVs, connected devices including Fire TV and mobile devices, or online at Amazon.com/mozartinthejungle.For a list of all Amazon Video compatible devices visit http://www.amazon.com/howtostream.