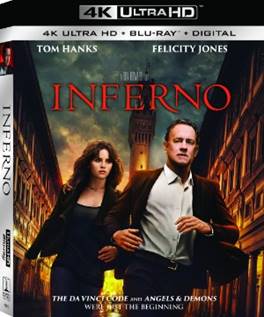 In what is rapidly becoming a rarity, all bonus features will be available in all formats. Read on for the complete list.

Bonus Materials Include Over 25 Minutes of Deleted Scenes,

The INFERNO Blu-ray, DVD and digital releases are loaded with exciting and never-before-seen bonus content, including deleted scenes and six intriguing behind-the-scenes featurettes. Director Ron Howard shares his process for bringing to life the iconic imagery described in Dante’s Divine Comedy and the powerful themes that the classic story infuses into the film in “Visions of Hell,” while in “Ron Howard, A Director’s Journal,” viewers follow the acclaimed auteur as he returns to the world of Robert Langdon and documents his journey via social media. “Inferno Around the World,” highlights the stellar international cast involved in the film and the crew’s unprecedented access to stunning locations across the globe. Novelist Dan Brown, Director Ron Howard, Screenwriter David Koepp and Tom Hanks explore the evolution of Robert Langdon across the franchise and the new insights discovered about the hero in “A Look at Langdon.” Felicity Jones is front and center in “This Is Sienna Brooks,” which shines a light on one of the film’s most complex characters and the precision with which the Oscar® nominated actress (Best Actress, The Theory of Everything, 2014) brings her to life, while Ben Foster’s character gets the spotlight in “The Billionaire Villain: Bertrand Zobrist,” where viewers go inside the mind of the brilliant but dangerous villain and hear from Foster and the filmmakers about crafting this terrifying character.

In this contemporary action thriller, the famous symbologist Robert Langdon (Tom Hanks) wakes up in an Italian hospital with amnesia and finds himself the target of a manhunt.  Langdon teams up with Sienna Brooks (Felicity Jones), a doctor he hopes will help him recover his memories.  Together, they race across Europe and against the clock to stop a virus that would wipe out half of the world’s population.

Directed by Ron Howard with a screenplay by David Koepp, INFERNO is based upon the novel by Dan Brown.  The film is produced by Brian Grazer and Ron Howard with David Householter, Dan Brown, William M. Connor, Anna Culp and Ben Waisbren as Executive Producers.

? “This Is Sienna Brooks”

? “Inferno Around the World”

INFERNO has a run time of approximately 121 minutes and is rated 14A.