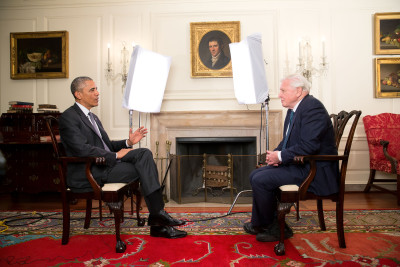 President Barack Obama participates in an Office of Digital Strategy taping with Sir David Attenborough of the BBC in the Map Room of the White House, May 6, 2015. (Official White House Photo by Chuck Kennedy)

On his 89th birthday, Sir David Attenborough (Planet Earth, Blue Planet, Frozen Planet) sat down with President Barack Obama for a conversation – a conversation about climate change, and the most critical issues threatening our planet.

A Conversation with President Barack Obama and Sir David Attenborough will be broadcast on BBC America this Sunday, June 28th (5:30 ET).

During this candid meeting, they discuss the future of the planet, their passion for nature and what can be done to protect it.

Recorded in May on his 89th Birthday, the special will broadcast on BBC AMERICA, the US home of the BBC’s landmark natural history series, this Sunday, June 28 at 5:30pm ET – simultaneously with the BBC One broadcast in the UK. BBC AMERICA will air an extended version at 8:00pm ET and make it available on BBCAmerica.com at 9:00pm ET.

The leader of the Western world wanted to meet Attenborough to talk to him about climate change, its effect on the environment, and to ask Attenborough his thoughts on the most critical issues threatening our planet.  The President has long been a huge admirer of Attenborough’s work.  He grew up watching Attenborough’s films, and after 60 years exploring the globe Sir David has witnessed the changing natural world first-hand.

Viewers will witness a unique exchange between the two men: the President talks about his initiatives for tackling climate change and addressing environmental issues, as well as his paternal roots in Africa and how his childhood in Hawaii and Indonesia established an enduring love of the natural world. David Attenborough relates tales from his long career, his recent record-breaking dive on the Great Barrier Reef and what he believes needs to be done about pressing issues such as the rising population, climate change and renewable energy.

“I have been a huge admirer of your work for a very long time…you’ve been a great educator as well as a great naturalist.”

He adds, “We’re not moving as fast as we need to and part of what I know from watching your programs, and all the great work you’ve done, is that these ecosystems are all interconnected.   If just one country is doing the right thing but other countries are not then we’re not going to solve the problem, we’re going to have to have a global solution to this.”

“What we’re seeing are global trends that depend on the entire world working together, and sadly we haven’t made as much progress as we need to on climate change.”

“On my 89th birthday it was to my considerable surprise to find myself in a place that I’ve never been to before…  to visit the White House with the President of the United States.  (He was) friendly, hospitable and genuine.”

“I believe that if we find ways of generating and storing power from renewable resources, we will make the problem with oil and coal disappear – because economically, we’ll wish to use these other methods. If we do that, a huge step will be taken in solving the problems of the Earth.”
“I think what’s required is an understanding and a gut feeling that the natural world is part of your inheritance. This is the only planet we’ve got and we’ve got to protect it.  And people do feel that, deeply and instinctively, it is after all where you go in moments of celebration and in moments of grief.”

“As the US home to the BBC’s landmark natural history series, we are privileged and delighted to present this extraordinary conversation with President Obama and Sir Attenborough, one of the greatest naturalists of our time.”

“It is extraordinary to see these two charismatic individuals together, thoughtfully addressing some of the most important issues facing the planet.  This intimate film which includes behind-the-scenes footage of President Obama and Attenborough at the White House, provides the context for their important debate.  It includes previously unseen footage as well as some of the highlights from Attenborough’s greatest films – including Life on Earth, Blue Planet, and Galapagos.”

Commissioned by Charlotte Moore, Controller of BBC One and Tom McDonald, Head of Natural History and Specialist Factual Formats.  The Producer for Atlantic Productions is Anthony Geffen.

BBC Worldwide is the global distributor and the special has already been sold internationally to over 50 countries across 4 continents including BBC Earth’s branded channels in the Nordics, Poland, Turkey, Hungary and Romania. This special airs on BBC AMERICA as production continues on the channel’s next landmark series The Hunt.