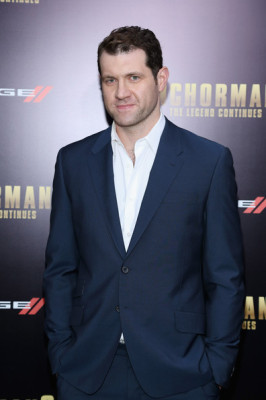 Difficult People has been given an eight episode straight-to-series order by HULU. The series – co-starring Billy Eichner (pictured) and Julie Klausener (who also wrote the pilot and will serve as an executive producer) – is about best friends whose typically irreverent behaviour keeps putting them in awkward situation.

The series is being produced by Amy Poehler’s Paper Kite Productions. Poehler and Dave Becky are executive producing. Difficult People will go into production in early 2015.

Difficult People hails from Julie Klausner (Billy on the Street) who stars alongside Emmy®-nominated Billy on the Street host Billy Eichner. As best friends living in New York City, their typical, irreverent behavior lands them in some very awkward situations. Klausner wrote the pilot and will also serve as an executive producer for the series.

“I tend to enjoy funny people creating and starring in comedy programs, and Julie and Billy are the funniest around,” said Poehler.

“Amy Poehler, Billy Eichner, and Julie Klausner are a dream team of comedic possibilities.  We look forward to bringing this hilarious view of the world to Hulu with our partners at Universal Cable Productions,” said Craig Erwich, Senior Vice President and Head of Content, Hulu.

The series also joins recent pick-up orders for Universal Cable Productions, which include Hunters, Childhood’s End and Magicians at Syfy; and Colony, Stanistan and Mr. Robot at USA.

“Working with the immensely talented trio of Amy Poehler, Billy Eichner and Julie Klausner on Difficult People has been an incredible experience and it definitely delivers on the title of the show in a hysterical way,” said Dawn Olmstead, Executive Vice President, Development, Universal Cable Productions. “We’re excited to collaborate on our first original series with Hulu and are looking forward to doing many more.”