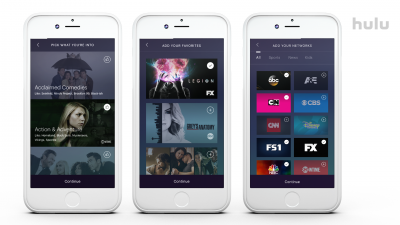 This morning, during its annual Upfront presentation, Hulu CEO Mike Hopkins announced the launch of the company’s brand new live TV streaming beta service, along with its groundbreaking new user experience, to the public.

Beginning today, viewers who subscribe to the Hulu with Live TV (Beta) plan can enjoy live and on demand programming from more than 50 popular sports, news, entertainment and kids’ channels — plus Hulu’s deep existing premium streaming library — all for $39.99 per month, with no setup costs or hidden fees.

Offers More Than 50 Popular Live and On Demand Channels —Plus Existing Hulu Premium Streaming Service — All For $39.99

New York, NY – (May 3, 2017) – This morning, during its annual Upfront presentation, Hulu CEO Mike Hopkins announced the launch of the company’s brand new live TV streaming beta service, along with its groundbreaking new user experience, to the public. Beginning today, viewers who subscribe to the Hulu with Live TV (Beta) plan can enjoy live and on demand programming from more than 50 popular sports, news, entertainment and kids’ channels — plus Hulu’s deep existing premium streaming library — all for $39.99 per month, with no setup costs or hidden fees. This includes 50 hours of recording storage, up to six individual profiles and two simultaneous streams per account, with options to upgrade to an enhanced Cloud DVR and unlimited in-home screens.

“Nearly a decade ago, Hulu forever redefined the way people watch TV. Today, as we add live sports, news and entertainment and introduce a more intuitive Hulu, we want to redefine the way people experience TV,” said Hopkins. “By bringing together thousands of live, on-demand and library shows and movies — and serving them up in a uniquely personalized way – Hulu can now be a viewer’s primary source of television. It’s a natural extension of our business, and an exciting new chapter for Hulu.”

“We have always believed that TV should fit your lifestyle, not the other way around,” said Ben Smith, Hulu’s SVP and Head of Experience. “You shouldn’t have to think about whether something is live, recorded or on demand, or care about which device you’re using.  TV is about connecting with the shows, movies and sports you love – and we want to make that really easy for you, no matter where you’re watching.”

Live and On Demand Channels, Originals and Library TV — All in One Place

In addition, the $39.99 per month base package includes Hulu’s existing $7.99 premium streaming offering with limited commercials, which offers more than 3500 TV and film titles — and now includes full seasons of Scripps Networks series — as well as acclaimed Hulu Originals such as The Path, The Mindy Project, Golden Globe-nominated comedy Casual, and 2017’s most talked-about new series, The Handmaid’s Tale. Viewers who wish to watch their Hulu Originals, movies, and library content without advertising can subscribe to the company’s on-demand No Commercials plan for an additional $4.00 per month.

TV That Gets You

Hulu now features an easy-to-use, intuitive interface that seamlessly blends together live, recorded and on-demand content.  From creating a personal profile to picking favorite TV shows, news channels and movies, Hulu makes it easy for viewers to watch what they love and enjoy the same personalized experience whether they’re at home on the couch or catching up on the go. The more a viewer watches, the more tailored the service gets, adjusting its recommendations based not only on the content they consume, but also time of day and which device they’re using.

For sports lovers, it is especially easy and convenient to customize the Hulu experience. Subscribers to the Hulu with Live TV (Beta) plan can follow their favorite major pro and college teams from leagues including the NFL, NBA, NCAA, MLB, MLS and NHL — and Hulu will surface and record those games live, subject to availability. There is no longer any need to know what channel the game is on.

Hulu also offers a “Kids Mode” for families with children. Setting up a profile in Kids Mode allows young viewers to enjoy Hulu’s full array of kid-friendly programming, without the ability to search or browse the rest of the Hulu catalogue.

All subscribers to the Hulu with Live TV (Beta) plan will automatically get to experience Hulu’s new interface. For Hulu subscribers who do not opt for live TV, the new interface is currently available on Xbox One, Apple TV (4th Gen.) and Android mobile devices.

Hulu viewers who choose the Hulu with Live TV (Beta) Plan can further enhance their Hulu experience by choosing premium content or feature add-ons that best fit their lifestyle:

For more information, a list of available live channels, or to sign up for the Hulu With Live TV (Beta) plan, please visit Hulu via a web browser:  www.hulu.com/live-tv.