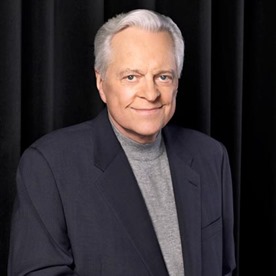 Movie lovers know Robert Osborne as the warm, knowledgeable host who seems to know everything about the movies he presents on TCM. He has interviewed some of the biggest names in film and knows more about movies than just about anyone – his love of movies, from classics to B-movie schlock is readily apparent.

On Monday, January 6, 2014, though, Osborne will be the guest on a special edition of Private Screenings (8/7C). He will be interviewed by guest host Alec Baldwin before TCM presents four films selected by him. Part of the special episode will be dedicated to tributes given such stars as Eva Marie Saint, Robert Wagner, Liza Minnelli, Chita Rivera, Jane Powell, Joel Grey, Diane Baker, Arlene Dahl, Barbara Rush, Tina & Nancy Sinatra and Mariette Hartley. For further details, check out the TCM press release following the jump.

"Ever since TCM launched, Robert Osborne has been the face of the network and its passionate, driving force," said Charlie Tabesh, senior vice president of programming for TCM. "Private Screenings: Robert Osborne is a perfect chance for viewers to get to know Robert and learn the story behind his fascinating career. As TCM celebrates its 20th anniversary, we are proud to take this opportunity to honor the man who has done so much to bring classic films to life for generations of movie lovers."

Robert Osborne has served as TCM’s host since the network’s launch on April 14, 1994. Osborne is a man whose fascinating stories, historical knowledge and sheer love of the subject have made his name synonymous with classic film. But the story of Robert Osborne’s own life is one that could be a movie itself. It’s the story of a small town boy from Colfax, Wash., who, at a young age, fell in love with film, moved to Hollywood and gave acting a try. He then became a writer, columnist and critic, as well as the official biographer of Oscar®, thanks to a series of books he’s written on the Academy Awards®. Osborne created an industry for himself as the keeper of the flame for classic film – all this at a time when nostalgia for Hollywood didn’t even exist. Then along came Turner Classic Movies with a job custom-made for his passion.

As TCM has expanded, so have Osborne’s duties. In addition to his hosting gig, he hosts TCM’s The Essentials weekly showcase with Drew Barrymore. And he serves as the official host of the TCM Classic Film Festival, held each spring in Hollywood, and the TCM Classic Cruise, which embarks on its third voyage this month.

In recognition of his contributions to classic film, Osborne received a star on the Hollywood Walk of Fame in 2006 and a special award from the National Board of Review in 2008.

Baldwin and Osborne’s conversation begins with his early days tracking the movies playing in New York and compiling the background information into a hefty notebook he affectionately calls "Blackie." Viewers will not only get to see Blackie on camera for the first time, but also enjoy clips from Osborne’s early days as an actor in commercials, as well as in the daytime drama The Young Marrieds and the pilot for The Beverly Hillbillies. In addition, Osborne is featured in several clips from The Dinah Shore Show, which frequently had him on to talk about the Academy Awards, and The Morning Program on CBS, for which he did movie and theater reviews.

The special is packed with great stories from Osborne’s life and career, which has included influential encounters with several notable figures, Jane Darwell, who suggested he move to Hollywood after working with him in a regional theater production; Lucille Ball, who put him under contract at Desilu and later encouraged him to go into journalism; Natalie Wood, who helped him work out the questions for his first interview; Olivia de Havilland, who asked Osborne to escort her to the American Film Institute’s tribute to Bette Davis and whom Osborne continues to talk nearly every Sunday; and Dorothy Lamour, who introduced Osborne to the executives who would eventually launch Turner Classic Movies. Osborne also speaks about the many memorable Private Screenings interviews he has conducted since the franchise launched in September 1995, including with such stars as Betty Hutton, Robert Mitchum, Jane Russell and Mickey Rooney.

One of the most memorable aspects of Private Screenings: Robert Osborne is a collection of personal, heartfelt testimonies from the many actors, actresses and other film personalities who have known and worked with him. Tributes are given by Eva Marie Saint, Robert Wagner, Liza Minnelli, Chita Rivera, Jane Powell, Joel Grey, Diane Baker, Arlene Dahl, Barbara Rush, Tina & Nancy Sinatra and Mariette Hartley.

The following is a complete schedule for TCM’s salute to Robert Osborne, which includes the premiere of Private Screenings: Robert Osborne, followed by four of Osborne’s favorite films.

Turner Classic Movies (TCM) is a Peabody Award-winning network that presents great films, uncut and commercial-free, from the largest film libraries in the world. TCM, which is available in more than 85 million homes, features the insights of hosts Robert Osborne and Ben Mankiewicz, plus interviews with a wide range of special guests. Currently in its 20th year as a leading authority in classic film, TCM offers critically acclaimed original documentaries and specials; film series like The Essentials, hosted by Robert Osborne and Drew Barrymore, and Friday Night Spotlight; and annual programming events like 31 Days of Oscar® in February, Summer Under the Stars in August and TCM Essentials Jr. during the summer. TCM also connects with movie fans through such events as the annual TCM Classic Film Festival in Hollywood and the TCM Classic Cruise, as well as through the TCM Classic Film Tour in New York City. In addition, TCM produces a wide range of media about classic film, including books and DVDs, and hosts a wealth of material online at tcm.com and through the Watch TCM mobile app.