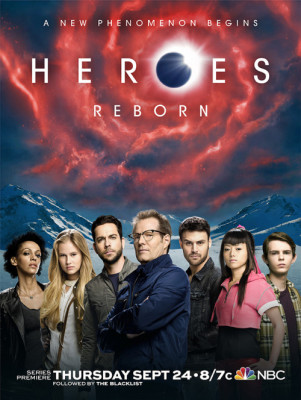 NBC’s event series Heroes Reborn will have a big screen world premiere at Toronto International Film Festival. It will be on of six high-quality television programs from around the world that will launch TIFF’s new Primetime Programme.

“The growing convergence and artistic equality between television and cinema has ushered in a new era of high-quality, small-screen programming,” said Piers Handling, Director and CEO of TIFF. “Primetime aims to spotlight the cross-pollination of these two moving image cultures, showcasing the bold and impressive work that’s being produced on an international scale.”

“Television has entered an artistic renaissance; we’re seeing, among other things, many filmmakers experimenting with that medium to broaden their forms of storytelling,” said Festival Programmer Michael Lerman. “The strongest storytellers are masters of change, and TV offers a narrative flexibility, a platform and a luxury for filmmakers to explore ways of telling longer stories that delve deeper into their characters.”

The programme includes Q&A sessions with show creators following the screenings. The Festival’s Industry Conference will also incorporate leading creative producers and thinkers from the world of long-form and episodic storytelling.

Festival favourite Jason Reitman (Juno, Up in the Air) directs this wonderfully endearing and quirky comedy from Hulu and Lionsgate that follows the story of young internet entrepreneur, Alex Cole, and his recently divorced therapist sister, Valerie. The creator of a popular dating website, Alex pledges to mentor Valerie as she attempts to embrace the craziness of single life. Meanwhile, he’s not above using his newfound success to supply himself with an endless string of beautiful but emotionally shallow women, none of whom will ever make him happy. Living under the same roof for the first time in years, brother and sister soon discover that while life can be both heartbreaking and hilarious, it’s anything but casual. Starring Tommy Dewey, Michaela Watkins and Tara Lynne Barr. The Festival presents the series premiere of Casual, episodes 1 and 2.

Directors Lucía Puenzo (XXY, Wakolda), Pablo Fendrik (Blood Appears, El Ardor) and Nicolás Puenzo team up for this timely eco-thriller, based on the real stories of a team of scientists that set out to expose environmental crimes in the dangerous and exotic wetlands of northern Argentina. Starring Germán Palacios, Guillermo Pfening, Emilia Attias, Alberto Ajaka and Malena Sanchez. The Festival presents the series premiere of CROMO, episodes 1, 2 and 8.

From Academy Award-winning director Morgan Neville (Twenty Feet from Stardom), this beautifully documented portrait of Keith Richards takes audiences on the road to discover the genesis of his sound as a songwriter, guitarist and performer. This Netflix Original is rich with music and archival materials, drawing upon hours of new, intimate and reflective conversations with Keith. It charts the journey of his sound and influences, back to the music that inspired him then and now — electric blues, country honky-tonk, southern soul, and more — as he creates his first solo album in 23 years.

In this noir-ish thriller series from director Baltasar Kormákur (Everest, The Deep, 101 Reykjavik), an unidentified torso is found in a small town in Iceland. When a blizzard makes the road out of town impassable, order disintegrates into chaos as the residents realize they are all possible murder suspects or all possibly in danger. A ruthless and troubled cop risks his life, his family and the town’s safety, in order to solve this mystery in the hope of recovering his tarnished reputation. Starring Ólafur Darri Ólafsson, Ilmur Kristjánsdottir, Ingvar Sigurðsson, Nina Dögg Filipusdottir and Bjarne Henriksen. The Festival presents the series premiere of Trapped, episode 1.

TIFF is a charitable cultural organization whose mission is to transform the way people see the world, through film. An international leader in film culture, TIFF projects include the annual Toronto International Film Festival in September; TIFF Bell Lightbox, which features five cinemas, major exhibitions, and learning and entertainment facilities; and innovative national distribution program Film Circuit. The organization generates an annual economic impact of $189 million CAD. TIFF Bell Lightbox is generously supported by contributors including Founding Sponsor Bell, the Province of Ontario, the Government of Canada, the City of Toronto, the Reitman family (Ivan Reitman, Agi Mandel and Susan Michaels), The Daniels Corporation and RBC. For more information, visit tiff.net.

L’Oréal Paris and Visa, and Major Supporters the Government of Ontario, Telefilm Canada and the City of Toronto.

The Primetime programme is made possible through the generous sponsorship of CraveTV™.

For information, contact the Communications Department at 416.934.3200 or email proffice@tiff.net.

For images visit the media site at tiff.net/press.