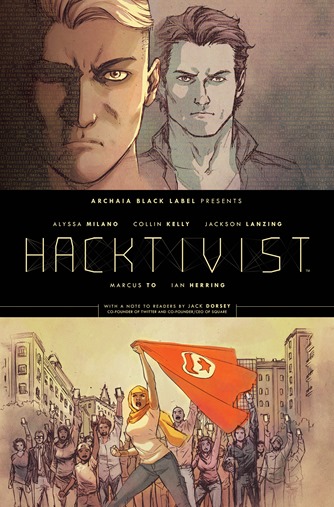 Alyssa Milano may be best known for frothy TV shows like Charmed and Mistresses, but her hit four-issue miniswries, Hacktivist, showcased a much different part of her creativity. Based on the premise, ‘What if the founders of the largest social media network in the world were also hackers who used their skills and resources to help social causes around the world? Then what if the U.S. Government found out?’ the miniseries is being collected in a hardcover edition that will be in comics shops on July 16th and in bookstores everywhere on July July 22nd.

For details – and social media info – follow the jump.

June 23,  2014 – Los Angeles, CA – Coming this July, Archaia, an award-winning imprint of publisher BOOM! Studios, is excited to announce the HACKTIVIST hardcover, a collection of the hit four-issue miniseries created by actress, philanthropist, and entrepreneur Alyssa Milano (Mistresses, Project Runway All Stars). Written by the team of Jackson Lanzing and Collin Kelly, penciled and inked by Marcus To (New Warriors, CYBORG 009), colored by the Eisner Award-nominated Ian Herring (JIM HENSON’S TALE OF SAND), and lettered by fellow Eisner Award nominee Deron Bennett (JIM HENSON’S TALE OF SAND), HACKTIVIST asks, What if the founders of the largest social media network in the world were also hackers who used their skills and resources to help social causes around the world? Then what if the U.S. Government found out?

Jack Dorsey, the co-founder and co-creator of Twitter and founder and CEO of Square, who inspired Milano to create the story, provides a Note to Readers in the book, which also contains an interview with real-life hacker and inventor Pablos Holman and commentary and early process work from the creative team.

“HACKTIVIST is such a great concept, and we’re all thrilled that it was so well received when it came out as a miniseries,” said BOOM! Studios Editor-in-Chief Matt Gagnon. “For those who may have missed out the first time, this hardcover edition is a beautiful collection of the entire series. And even if you’re already familiar with the story, we’ve packed in a bunch of great additions and extras. The overall presentation is gorgeous, as everybody has come to expect from Archaia.”

The world knows Ed Hiccox and Nate Graft as the young, brilliant co-founders of YourLife, a social networking company that has changed the way the world connects with each other. The world knows “.sve_Urs3lf” as the largest white-hat hacking group on the planet, exposing information and sparking revolutions across the globe. What the world doesn’t know is that this is a lie. Ed Hiccox and Nate Graft are .sve_Urs3lf. When their operation is discovered by the US Government, and their company is taken over by military contracts and the CIA, Ed and Nate must face the real world beyond the code and choose between friendship and what they believe to be right.

The HACKTIVIST hardcover collection arrives from Archaia in comic shops on July 16th and bookstores on July 22nd with a cover price of $24.99 under Diamond Order Code MAY141168 and ISBN 978-1-60886-409-6. Not sure where to find your nearest comic retailer? Use comicshoplocator.com or findacomicshop.com to find one!

HACKTIVIST Hardcover Cover by Marcus To and Ian Herring