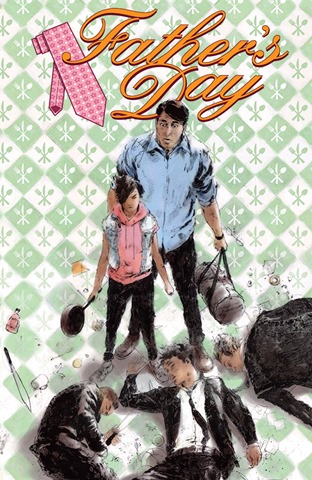 Mike Richardson is best known for being publisher of Dark Horse comics, but he’s also a multiple Eisner Award nominate writer of such titles as 47 Ronin, The Secret, and The Atomic Legion. Now he has written a four-issue miniseries that ‘takes fanily matters to a whole new level.’

It’s been twenty years since Silas was the mob enforcer known as the East Side Butcher, and he’s enjoying his nice, peaceful life – until his estranged daughter arrives and, unwittingly, leads a horde of hit man with scores to settle right to her dad.

How to be a good dad: stop killing people!

As a mob enforcer, he was called the East Side Butcher, but twenty years later Silas has found peace. That is, until his abandoned daughter shows up to give him a piece of her mind…and unwittingly leads a legion of hit men to settle accounts with Silas!

About Dark Horse
Founded in 1986 by Mike Richardson, Dark Horse Comics has proven to be a solid example of how integrity and innovation can help broaden a unique storytelling medium and establish a small, homegrown company as an industry giant. The company is known for the progressive and creator-friendly atmosphere it provides for writers and artists. In addition to publishing comics from top talent, such as Frank Miller, Mike Mignola, Neil Gaiman, Brian Wood, Gerard Way, Felicia Day, and Guillermo del Toro, and comics legends, such as Will Eisner, Neal Adams, and Jim Steranko, Dark Horse has developed its own successful properties, such as The Mask, Ghost, Timecop, and SpyBoy. Its successful line of comics and products based on popular properties includes Star Wars, Mass Effect, Buffy the Vampire Slayer, Aliens, Conan, EVE Online, Halo, Serenity, Game of Thrones, and Domo. Today Dark Horse Comics is the largest independent comic book publisher in the US and is recognized as one of the world’s leading publishers of both creator-owned content and licensed comics material.