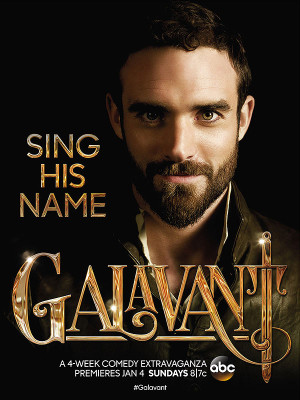 In one of the biggest surprises of the year, the ratings challenged ABC Musical event series Galavant was picked up for another season. The comedy returns Jan 3rd. Season two picks up where the last one left off, with a little song and dance number about being happy to prove everyone wrong and a promise of a bigger and better 2nd season.

It’s been a few weeks since Galavant (Joshua Sasse) and King Richard (Timothy Omundson) are still on their Pirate ship headed to Richard’s homelands. Galavant hopes to raise an army that can help him save his new true love Isabella (Karen David) who is still trapped in her little Princess prison by her 11 year old cousin. Meanwhile the evil, self centered Madalena (Mallory Jansen) is trying to rule her new Kingdom while ignoring Gareth (Vinnie Jones) as best she can. Gareth is trying to figure out his role in the new world order and is getting tired of being called “The man who was with the Queen when the King died.”

The show is still cute and charming, but my issue with it has always been the music and that’s still the case here. The musical moments feel a bit toned down this season and more self assured. I would really like to see them experiment more with different genres. One of my favorite episodes last season was the Doo Wp monks with Weird Al, it was so out of place that it made the episode a lot of fun. This season in the 2nd ep, they do a little experimenting with a full blown disco number that is a variation of It’s Raining Men. 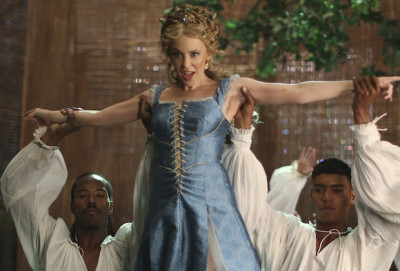 The first few episodes’ centers around Richard and Galavant’s budding bromance as we watch these former rivals come to terms with everything that happens. Richard is not happy with what he finds of his Kingdom when they finally arrive and decides that he wants to join Galavant on his quest.  Meanwhile after some juvenile spats, Madelena and Gareth finally decides on a title, while Sid (Luke Youngblood) becomes his new servant.

I love the look and feel of this world. I’m a sucker for colorful, wide-open landscapes which Galavant S2 delivers this in spades. The costumes also look gorgeous. ABC has clearly spent some money of this show. 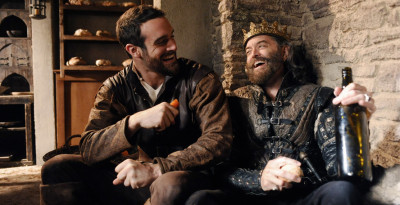 The quest in Season 2 is the same as season 1 which they make fun of a bit in Episode 3 when Galavant asks people to support him in his quest to save his true love and everyone comments that he already did that with Madalena. How many true loves does one guy get to have? Is an ongoing joke for this new season. Some things happen that I don’t want to spoil – you’ll have to read my recaps starting next week (I’ve already seen the first 7 eps) for the big things that happen with regards to his potential relationship with Isabella.

I really like the cast, it is a likable enough crew that is watchable. I don’t think Galavant is nearly as funny as it should be and I wish it was a bit cheekier or even slyer in the way it delivers the jokes. However, Galavant is a charming enough diversion from all the serious television that I have a tendency to watch and I do like that it’s a quick series to go through. I just wish the music was better than it is and at the moment I’m not really feeling Isabelle’s plotline either. The show works because Richard & Galavant, and Madelena & Garrett together is gold.