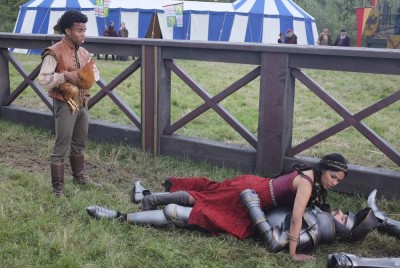 AIRS JANUARY 7 ON ABC WITH AN ENCORE PRESENTATION

OF THE PREMIERE BACK-TO-BACK EPISODES

Screenwriter/executive producer Dan Fogelman (“Crazy, Stupid, Love,” “Tangled,” “Cars”) unites with Broadway and Hollywood award-winning musical team—composer Alan Menken (“The Little Mermaid,” “Aladdin,” “Beauty and the Beast”) and lyricist Glenn Slater (“The Little Mermaid,” “Tangled”) for a highly-anticipated comedy extravaganza. Once upon a time, the dashing hero, Galavant (Joshua Sasse), lost the love of his life, Madalena (Mallory Jansen), to the evil King Richard (Timothy Omundson). Now, our fallen hero is ready to take revenge and restore his “happily ever after.” But it won’t be without a few twists and turns along the way. “Galavant” airs on WEDNESDAY, JANUARY 7 (10:00-11:00 p.m., ET) with two 30 minute episodes, back-to-back on the ABC Television Network. (Rebroadcast. OAD: 1/4/15)

Editor’s Note: This episode replaces “Forever” episode “The Man In the Killer Suit.”

“Pilot” (10:00-10:30 p.m., ET) – When heroic, charming and handsome Sir Galavant loses his true love, the beautiful Madalena, to evil King Richard’s wealth and power, he falls into a deep and drunken despair. Just as our hero hits rock bottom, Princess Isabella shows up with a quest to save her kingdom, defeat the despicable King Richard, and provide an opportunity for Galavant to reclaim Madalena. Galavant is off to become a hero again and strike a blow for true love…but first, Galavant has to fit into his old hero pants.

“Joust Friends” (10:30-11:00 p.m., ET) – Galavant enters a jousting tournament against a boastful rival, Sir Jean Hamm (guest star John Stamos), to test his return to heroic form (and win some much-needed traveling money and a really nice rooster). But it quickly becomes clear that Galavant is a long shot to win. Meanwhile, King Richard asks Gareth to help him become a bit more macho so that Madalena won’t despise him quite so much.

Photo by Nick Ray/Courtesy of ABC