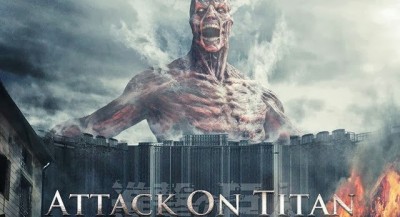 Parts 1 & 2 to Screen Beginning September 30 and October 20 Respectively in U.S. and Canada

FLOWER MOUND, TEXAS – August 14, 2015. Following the widely-covered and well-received world premiere of Part 1 of the Japanese live-action feature film “Attack on Titan” last month in Los Angeles, FUNimation® Entertainment announced today the theatrical dates for the epic two-part movie. “Attack on Titan” will be a limited theatrical event and will screen in both the U.S. and Canada.  Unlike most multi-part films that average up to a year between installments, moviegoers will wait just 3 weeks between Part 1 & 2. “Attack on Titan” Part 1 hits theaters beginning September 30 with Part 2 arriving in theaters beginning October 20.

“Fan reaction to Attack on Titan was extremely positive at the world premiere and we’re pleased to be able to announce dates for the theatrical releases in September and October,” said Gen Fukunaga, CEO and President of FUNimation Entertainment. “Attack on Titan is a worldwide phenomenon and we are excited to bring the live action movies to not only fans of the manga and anime but also horror fans as well from across the U.S. and Canada.”

The “Attack on Titan” (“Shingeki no Kyojin” in Japanese) movies, which take their name from the original manga series, were developed in close collaboration with series’ creator Hajime Isayama and tell the story of a world where the last of humanity fights to survive against almost unstoppable, man-eating giants. With more than 50 million copies in print today, the “Attack on Titan” manga series has inspired four spin-offs as well as a 25-episode anime series, which FUNimation both simulcast and released to home video in North America.

As part of the announcement, FUNimation’s theatrical trailer for the movies has been released on the official movie website.  Tickets for both movies will be limited and will be available for advance purchase on the website later this month.

For more information on “Attack on Titan” and to watch the new theatrical trailer, visit www.attackontitanthemovie.com.