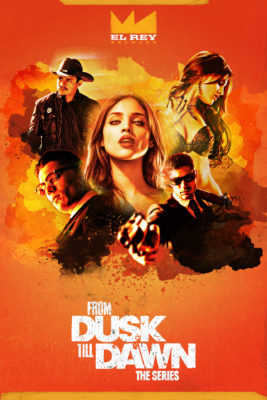 El Rey Network has begun production on season three of From Dusk Till Dawn: The Series – bringing in three new cast members and bringing back a key guest star from season two.

New this season are: Ana de la Reguera (Jane the Virgin) in the recurring role of Lord Venganza Verdugo, one of the seven remaining culebra Lords; Chilean martial arts action star, Marko Zaror (Machete Kills), as Zolo, an Aztec warrior trained in hell, and Tom Savini From Dusk Till Dawn). Savini – Sex Machine in the original film – in the brand new role of Burt, a retired demon hunter who smokes more medical marijuana than he sells.

Emily Rios (“The Bridge,” “Breaking Bad”) will reprise her season two role as Ximena, the no-nonsense lieutenant of Lord Venganza.

From Dusk Till Dawn: The Series will return later this year. For more, follow the jump.

Albuquerque, NM – April 26, 2016 –MIRAMAX® and El Rey Network announced today four new cast additions to Albuquerque-based production of “From Dusk Till Dawn: The Series,” set to return for a third season later this year. Ana de la Reguera (“Jane the Virgin,” “Narcos”) will have a recurring role as Lord Venganza Verdugo, one of the seven remaining culebra Lords whose ancient roots and personal history put them at the center of an epic clash between good and evil. Also joining the cast is Chilean martial arts action star, Marko Zaror (Machete Kills), as Zolo, an Aztec warrior trained in hell, and iconic horror movie maven Tom Savini (Friday the 13th, From Dusk Till Dawn). Savini, who starred as Sex Machine in the original film, lights up the brand new role of Burt, a retired demon hunter who smokes more medical marijuana than he sells.

Returning to the supernatural action horror saga is Emily Rios (“The Bridge,” “Breaking Bad”) who will reprise her season two role as Ximena, the no-nonsense lieutenant of Lord Venganza.

Ana de la Reguera recently co-starred on the Golden Globe-nominated series “Narcos” as Elisa Alvaro and “Jane The Virgin” as Paola, and as previously reported, was recently cast in the highly anticipated reboot of David Lynch’s “Twin Peaks.” She is repped by Paradigm, ROAR, and Gang, Tyre, Ramer & Brown.

Marko Zaror began his career with a passion for martial arts and fighting, inspired by Bruce Lee, Jackie Chan and Jean Claude Van Damme. He landed his big break in 2003 where he acted as stuntman and martial arts double for Dwayne “The Rock” Johnson in the film The Rundown.  Zaror then gained international notoriety as lead in indie action favorites Kitro, Mirageman, and Mandrill. Zaror played Zaror in Robert Rodriguez’s sequel, Machete Kills.   He can currently be seen as the lead in “Redeemer” and playing Marcus in the upcoming Bollywood film “Sultan.”

Emily Rios recently co-starred in the television series “The Bridge” as Adriana Mendez.  Best known for her role as Andrea Cantillo on “Breaking Bad,” Emily made her acting debut as the lead in the critically acclaimed film Quinceañera.  She has also had recurring roles on several successful television series including “True Detective,” “Friday Night Lights,” and “Men of a Certain Age.”  She is repped by Kass Management and Domain Talent.

Tom Savini is no stranger to the horror genre, having possessed vital roles in classics like Friday the 13th, Dawn of the Dead, Creepshow and Day of the Dead – Savini is a true master of the field. Recent years have brought him acting acclaim with roles in films like From Dusk Till Dawn, Machete, Django Unchained and Grindhouse. Savini is repped by Artist International.

Season three continues the Gecko Brothers’ saga, as they fight their way through the world of culebras, the vampire-snake hybrids that control hidden empires in Texas and Mexico.   Once the baddest outlaws in the land, Seth and Richie made a run for the border two years ago, to save their lives – and their fortune. They ran headlong into a bar full of bloodsuckers and bandits, facing off with the vampire goddess, Santánico. The Geckos joined her cause and settled an old score.  It won them a place in the culebra world. Now, that world is about to explode, and new enemies are gathering – dark forces, hell-bent on destruction and domination. It’s up to the Geckos to stop them – but they can’t do it alone.

MIRAMAX® distributes “From Dusk Till Dawn: The Series” internationally in all territories.

El Rey Network is a 24-hour English language network founded by maverick filmmaker Robert Rodriguez.  Curated by Rodriguez and his artistic collective, the network unites “the new mainstream” through badass content that awakens the renegade in everyone.  El Rey’s action-packed slate is anchored by signature series including the original drama, “From Dusk Till Dawn: The Series” which will return for a third season, the one-on-one interview program, “El Rey Network Presents: The Director’s Chair” and “Lucha Underground,” a freestyle wrestling series from Mark Burnett. El Rey Network’s lineup also showcases a wide range of iconic feature films and TV series including genre, cult classics, action, and horror/sci-fi.  El Rey Network LLC is jointly owned by Robert Rodriguez and FactoryMade Ventures with a minority stake held by Univision Networks & Studios, Inc.