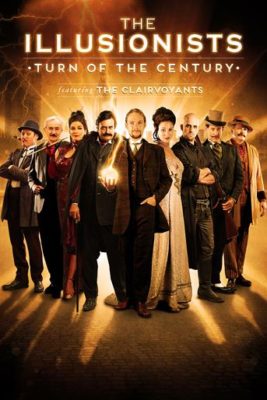 They may have been runners up on America’s Got Talent, but illusionist duo The Clairvoyants are heading to Broadway as stars of a new, magical revue: The Illusionsts – Turn Of The Century.

The Clairvoyants (Thommy Ten and Amélie van Tass), who were last week crowned runners-up in NBC’s 2016 “America’s Got Talent” competition, will lead the cast of The Illusionists – Turn Of The Century as the production returns to Broadway for the third consecutive holiday season with a new show designed to transport audiences back to the golden age of magic.

“You have magic powers,” Cowell said. Mandel added, “I have been here for seven years. That is the most amazing thing I have ever seen.” Klum said, “I’m floored. . . . I have no idea how you did this. It’s absolutely incredible.” And Mel B. said, “I feel like I’m stuck in some crazy Twilight Zone or something… That is a talent beyond this planet. It’s alien-like or something.”

Over 13 million people have viewed The Clairvoyants’ performances via AGT’s YouTube channel. Watch their final performance above.

Due to popular demand, The Illusionists – Turn Of The Century is moving to the historic Palace Theatre (47th Street and 7th Avenue), a venue renowned for housing the world’s premiere magicians and vaudeville acts at the turn of the twentieth century. The previously announced performance dates remain unchanged; the limited engagement will play November 25, 2016 through January 1, 2017.

The Palace Theatre is the perfect venue for The Illusionists – Turn Of The Century. Harry Houdini himself performed at the magnificent theater, which opened on March 24, 1913, riding the wave as New York City became the American epicenter of live entertainment and The Palace became the premiere venue for notable headliners of the day including Ed Wynn, Will Rogers, Fanny Brice, the Marx Brothers, Red Skelton, Bob Hope, ventriloquist Hank Siemon and “Archie,” circus performer and trick horse rider Edwin “Poodles” Hanneford, silent film actor Roscoe Arbuckle, and comedian and pantomime Danny Kaye.

Now, more than 100 years after the Golden Age of magic, the legendary magicians and shocking feats of the vaudeville era return home in the heart of Times Square. 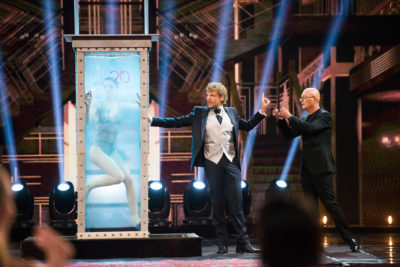 Tickets for The Illusionists – Turn Of The Century are on sale at www.ticketmaster.com or by calling 877-250-2929.

Tickets are currently still being sold for the Lunt-Fontanne Theatre. However, Ticketmaster customers who purchased tickets for The Illusionists at the Lunt-Fontanne Theatre will have their tickets automatically exchanged into comparable seat locations for the engagement at the Palace Theatre. Ticketmaster customer service will process the exchanges between now and November 1. No additional customer action is required. If you purchased tickets anywhere other than Ticketmaster, please contact your point of purchase to exchange your tickets.

Amélie van Tass and Thommy Ten are “The Clairvoyants.” They were both born and raised in Austria and now reside in Austria and America. When they met in October 2011, they began to develop their “second sight” act, and two months later brought it on stage for the first time. Within a year they had developed a full length show. Shortly thereafter, they started touring Europe. In 2014, they received their first long term contract in America. They performed in the show “The Illusionarium” by Jeff Hobson. A theatre was specially built for this show on the cruise ship “Norwegian Getaway.”

A highlight of their career was the opportunity to perform their show at the Sydney Opera House. This upcoming winter, they will experience another career highlight, appearing in The Illusionists – Turn of the Century at the Palace Theatre on Broadway.

In 2016, they decided to take part in the biggest talent show in the world, “America’s Got Talent.” After four months, six different performances and over 100,000 contestants, America voted them runners-up. In October 2016 they will appear, together with winner Grace Vanderwaal, at Planet Hollywood in Las Vegas. Being part of this show was another major step in the evolution of their career.

About The Illusionists – Turn Of The Century

Featuring world class illusionists handpicked from across the globe, Broadway’s holiday smash hit, The Illusionists, returns to New York City with a new show designed to transport audiences back to the golden age of magic.  The Illusionists – Turn Of The Century is centered in a time when conjurers were the true rock stars of the day. Showcasing the origins of some of the greatest and most dangerous illusions ever built, the show also unveils never-before-seen experiments drawn from a treasure trove of long-forgotten mysteries.

Audiences are invited to discover first-hand the spectacles that transformed stage entertainment over 100 years ago with a cast of world famous magicians playing incredible characters, each of whom embodies a magical great of the past.