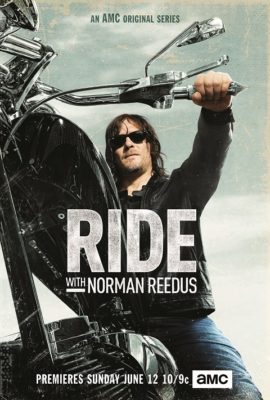 Norman Reedus is off to see America – on his motorcycle.

Each week on Riding With Norman Reedus, Reedus and a riding companion – like the original Easy Rider, Peter Fonda journey to new locations throughout the U.S.

“Ride with Norman Reedus” follows “The Walking Dead” fan-favorite star and motorcycle enthusiast as he hits the open road to explore local biker culture and celebrate the best and brightest collectors, mechanics and craftsmen around the country. Each one-hour installment of “Ride with Norman Reedus” will feature Reedus with a riding companion – notable guests include Peter Fonda, Robert Rodriguez and Balthazar Getty – as they journey to new destinations throughout the United States, including North Carolina, Florida, California, Nevada, Texas and Louisiana.  Reedus and friends stop by various locales such as custom bike shops, tattoo parlors, collector’s warehouses, or a roadside smokehouse.

Previously released series trailers can be found on amc.com.