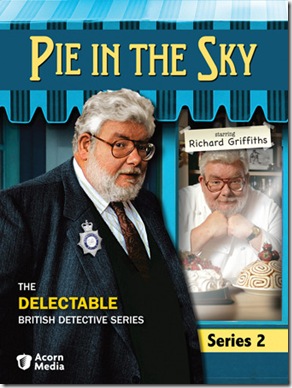 The ten episodes that comprise Series [season] Two of Pie in the Sky originally aired in the winter of 1995. Such is the show’s writing, direction and acting that it remains as entertaining now as it was then. The series stars Richard Griffiths [best know as Harry Potter’s Uncle Vernon] as Henry Crabbe; a semi-retired detective inspector who has opened a restaurant [in his wife’s name for legal reasons] called Pie in the Sky.

He is semi-retired after having been shot – and though there seems to be some question as to the circumstances of his injury, his boss, Assistant Chief Constable Freddie Fisher [Malcolm Sinclair] is really to blame – and it is he who keeps Crabbe from retiring [which would expose his own stupidity and incompetence], by refusing to sign off on a full pension. Crabbe’s job now is to handle things whenever Fisher finds himself in a jam [which is often].

Over the ten eps of series two, Crabbe has to contend with a peeping tom; a dead body that disappears from his restaurant’s loo [and connects with a long standing counterfeiting operation]; the resulting increase in business following a positive review from a renowned food critic [and his wife’s eagerness to cash in on the restaurant’s newfound fame]; an actual murder that appears to be one of a series, and even death threats made via anonymous letter to a famous psychic.

Crabbe is a man of taste, imagination and ability, which makes his having to put up with Fisher a source of great discomfort. Fortunately, when on the job, he is ably assisted by Detective Sergeant Sophia Cambridge [Bella Enahoro] and frequently achieves results that give Fisher the odd bit of grief.

In the restaurant, Crabbe reigns supreme as Pie in the Sky’s chef. Though a gifted chef, he is worthless as a businessman so it’s a good thing his wife, Margaret [Maggie Steed] is an accountant – although she gets in over her head when she doesn’t take his advice [check out the adventures she has with fame in the series [season] finale, Lemmon Twist [telephone answering machines can be a great source of fun!].

Typical of the show’s sense of humor is the episode The Mild Bunch in which Crabbe, on the trail of a pair of senior sisters who’ve been writing bad cheques, is more interesting in getting their recipe for bread pudding. Another highlight is The One That Got Away, wherein Crabbe is suspicious of a friend’s murder confession – because of a missing bottle of Scotch.

Pie in the Sky: Series 2 is a collection of mysteries that really are, for lack of a better word, cozy – and the adventures of the restaurant staff set of those mysteries with an entirely different, but complementary, kind of coziness.