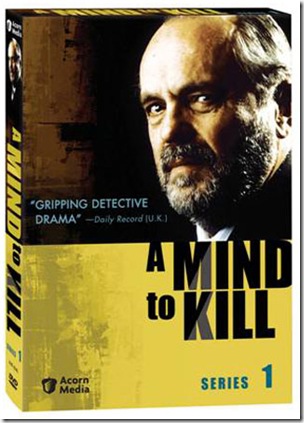 A Mind to Kill: Series 1 introduces us to Bain as he investigates the brutal beating of a young man who was working in the local mine – possibly by one of the mine’s striking workers – and the murder of a young prostitute. Right away, we are introduced to a new thing – a mobile investigation centre: a trailer outfitted with a forensics lab. The head of the striking union, and an old friend of Bain’s, is played by John Rhys-Myers [Raiders of the Lost Ark], and Madoc was well known from appearances on Doctor Who [he guests on an ep in the rebooted show’s upcoming season] and the mini-series, A Very British Coup.

Also introduced right off, is the rocky relationship between Bain and his teen-age daughter, Hannah [Ffion Wilkins] – and by the time the series’ fourth ep, Rest Not Secure rolls around, she’s moved out because of her resentment of his job. It’s interesting to watch that relationship founder because, like the rest of show, there are no punches pulled. It’s all too real.

While the first series finale, Rachel Hardcastle, is interesting because Bain finds himself as a suspect in a murder [the man’s wife, a famous concert pianist, was making romantic overtures towards him], my personal favorite of the set’s six 100-minute eps is the second, White Rocks.

While it’s true that A Mind to Kill is a dark and twisty show – “set in a Wales more bleak than picturesque,” reads the back cover copy – it’s also an affirmation that for all the darkness in the show, there is also hope and, occasionally, joy.

A Mind to Kill was also the first series to be shot, in its entirety, in both Welsh and English.