It’s a reasonably nice day in Manchester in 2006 and Detective Inspector Sam Tyler [John Simm] and his team, which includes his girlfriend Maya [Archie Panjabi] have discovered another victim of a particularly cagey serial killer. When Sam and Maya quarrel about methodology and hunches, Maya stalks off and, following her hunch, is taken by the killer – which leads to Sam being hit by a car and waking up in 1973. 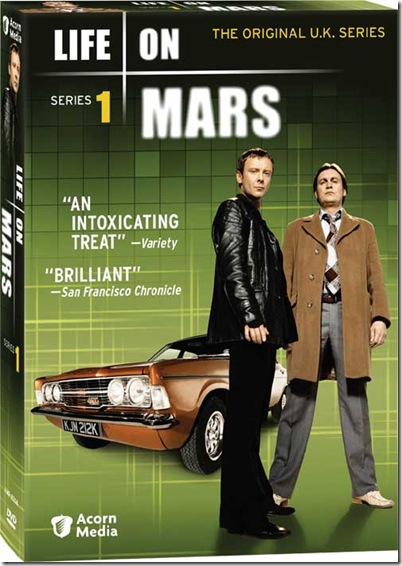 As Sam becomes acclimatized, however unwillingly, to his new environs – and their much earthier methods of policing – he comes to the conclusion that his situation is one of three things: madness; a coma, or actual time-traveling. One thing is for sure: Manchester of 1973 might as well be Manchester of 1953 from the misogynistic, rough & tumble, hunch-following nature of his new boss, Detective Chief Inspector Gene Hunt [Philip Glenister]. Only Women’s Police Constable Annie Cartwright [Liz White] is at all sympathetic to his confusion – Detective Sergeant Ray Carling [Dean Andrews] is outright hostile, and Detective Sergeant Chris Skelton [Marshall Lancaster] has no idea what to make of him.

Whether Sam is faced with a younger version of the serial killer he was after in 2006, or discovering that most of the cops in his precinct are bent, or even that his dad – who disappeared when he was four – might not be the innocent family man Sam remembers, there are always signs that 1973 isn’t his natural home. That is, of course, unless the test pattern girl with the doll isn’t actually appearing to him in his room and taunting him; the TV doctor with the patently false beard is actually talking about Sam’s condition and trying to wake him up by snapping his fingers under Sam’s nose, or those odd phone calls on disconnected phones are signs of his impending death in the future. And just what the hell are those flashes of tress and red blurs and buckled shoes all about, then?

The fascinating thing about Life On Mars, especially in its first series [season], is that all of Sam’s conjectures – and efforts to figure out why he’s in 1973 to begin with – are wrapped in the framework of a solid police/mystery show. Crimes must be solved and bonds must be created between Sam and his new colleagues. The result is a cop show that mixes science fiction with an odd kind of police procedural and just a dash of soap opera. 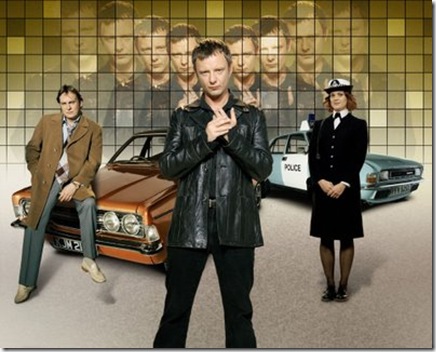 The surprising thing is that the Americanized version that ran on ABC is, allowing for the purging of the language, a surprisingly accurate translation in terms of major events [except of course, for that peculiar ending]. The difference is this [and this makes all the difference]: Jason O’Mara played a terrific Sam Tyler, but John Simm is Sam Tyler; Harvey Keitel played a wicked Gene Hunt, but Philip Glenister is Gene Hunt, and of course, Gretchen Mol was a wonderful Annie, but Liz White is Annie.

It’s that extra level of performance, in combination with consistently great writing and intense direction that makes Life On Mars, the original, a better show on every level. If you loved the American version, you’ll really love the original. If you really loved the original, now you can get the first series [season] on DVD. It’s a win-win situation.

Features: generally excellent Audio Commentaries [various configurations of producers, writers, directors and cast comment on all eight episodes]; Take a Look at the Lawman – a one hour making of documentary split between discs one and two; Interview Clip with Bharat Nalluri [director for the first two episodes]; The Music of Life On Mars – composer Ed Butt takes us through the surprisingly complex task of composing and arranging the series’ theme music; Get Sykes – featurette with production designer Brian Sykes, and a [sadly] pretty average Outtakes Reel.