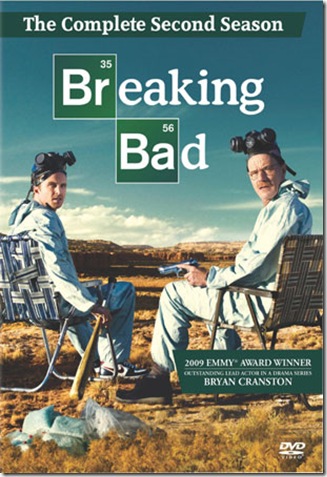 Thematically, the season is all about consequences – foreshadowed by an elegantly shot teaser for the season opener, shot in black & white, that leads to a one-eyed, burnt pink teddy bear floating in the Whites’ pool. Some of the cooler season arcs include Walt’s therapy; his wife Skylar’s [Anna Gunn] return to work after the birth of their baby; Jesse’s finding a cool landlord/girlfriend in Jane [Krysten Ritter]; Walt Jr.’s [R.J. Mitte] search for his own identity; Hank’s post-traumatic stress syndrome, and Walt and Jesse’s acquisition of a lawyer, Saul [Bob Oedenkirk].

With a lot of TV series, including great shows like Lost, the second season doesn’t quite live up to the promise of season one. With Breaking Bad, nothing could be further from the truth. The writing is sharper, deadlier and funnier than season one – partly because the characters have been so well developed and partly because series creator had the overall season arc sketched out from the get-go.

Visually, Breaking Bad continues to shake things up with things like a series of black & white sequences that foreshadow a tragedy in the season finale; another teaser that is, essentially, a single, eight-minute shot; an homage to Flight of the Phoenix, and a generally amazing use of color and texture.

Walt turns an important corner here, too. By the end of the season finale, ABQ [air traffic controller-speak for Albuquerque], he is no longer the decent man making bad decisions – his is the King of Liars and a criminal mastermind [small m…].