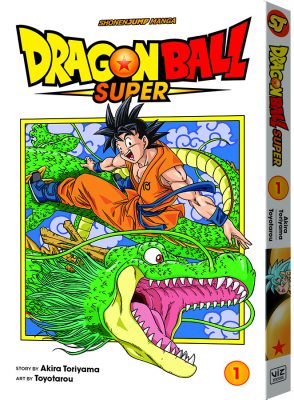 It would never do for Goku and his friends to get bored (peace is not exactly an adventure). Fortunately (for him – not everyone else), things are about to get interesting again.

Dragon Ball creator Akira Toriyama’s sequel series, Dragon Ball Super – with art by Toyotarou – will be launched on May 2nd both in print and digital.

San Francisco, CA, April 19, 2017 – VIZ Media, LLC (VIZ Media), a premier company in the fields of publishing, animation distribution, and global entertainment licensing, proudly announces the exciting follow up to the iconic, best-selling saga DRAGON BALL with the launch of DRAGON BALL SUPER on May 2nd.

The new series will be published in digital and print editions under the company’s Shonen Jump imprint. DRAGON BALL SUPER delivers a captivating new martial arts adventure written by DRAGON BALL creator Akira Toriyama and features artwork by manga illustrator and DRAGON BALL super-fan Toyotarou. DRAGON BALL SUPER is rated ‘T’ for Teens and will carry a print MSRP of $9.99 U.S. / $12.99 CAN. The series also launches digitally on May 2nd via VIZ.com and the VIZ Manga App, as well as from the Nook, Kobo, Kindle, iBooks, comiXology, and Google Play stores. Continuing chapters of the series are also available for FREE on VIZ.com/ShonenJump/chapters/all!

In DRAGON BALL SUPER, ever since Goku became Earth’s greatest hero and gathered the seven Dragon Balls to defeat the evil Boo, his life on Earth has grown a little dull. But new threats loom overhead, and Goku and his friends will have to defend the planet once again in this continuation of Akira Toriyama’s best-selling series, DRAGON BALL!

“Manga and action fans are going to love DRAGON BALL SUPER, which marks the return of Akira Toriyama’s world-famous manga series,” says Marlene First, Editor. “Goku puts aside his idyllic life and faces powerful new enemies across the multi-verse in this thrilling continuation of the DRAGON BALL saga. Between Toriyama’s creative genius and Toyotarou’s dynamic art, strap in for an action-packed adventure with volume 1’s release this spring!”

Internationally renowned for his playful, innovative storytelling and humorous, distinctive art style, Akira Toriyama burst onto the manga scene in 1980 with the wildly popular series, DR. SLUMP. His hit series DRAGON BALL (published in the U.S. as DRAGON BALL and DRAGON BALL Z) ran from 1984 to 1995 in Shueisha’s Weekly Shonen Jump magazine. He is also known for his design work on video games such as Dragon Quest, Chrono Trigger, Tobal No. 1, and Blue Dragon. His acclaimed manga works include COWA!, Kajika, SAND LAND, Neko Majin, and a children’s book, Toccio the Angel.

Toyotarou created the manga adaptation of the Dragon Ball Z anime’s 2015 film, Dragon Ball Z: Resurrection F. He is also the author of the spin-off series Dragon Ball Heroes: Victory Mission, which debuted in V-Jump in Japan in November 2012.