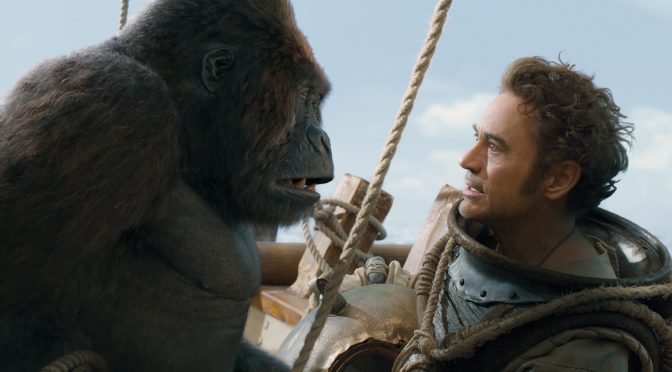 What you need to know: Despite the tragedy of the opening (certainly no worse than Bambi, or Up), Dolittle soon sets out on a Grand Quest for a special plant that save the life of the Queen.

The death of his wife has made Dr. Dolittle (Robert Downey Jr.) has turned veterinarian Dolittle into a curmudgeonly recluse – at least insofar as people are concerned. (He lives on a grand estate granted to him by the Queen in recognition for his services).

He is forced to reassess himself when an emissary from the Queen requires his assistance (apparently he’s also a people doctor of some skill) – simultaneously becoming an extremely unwilling mentor to Stubbins (Harry Collett, Dunkirk, Galavant), a young lad who has brought him an injured squirrel to save (the product of an attempt to not shoot a bird while hunting with his father).

Stubbins and the young lady, Lady Rose (Carmel Ladiado, FX’s A Christmas Carol), hit it off and between them get the squirrel healed and Dolittle off to see the Queen.

Dolittle soon deduces that the Queen has been poisoned and requires the juice of a legendary plant to save her – but the only map to the unknown island where it grows, was apparently lost in the sinking of the lost ship his wife was on.

The clearly villainous (they all but twirl their mustaches) Lord Badgely (Jim Broadbent, Game of Thrones, The Legend of Tarzan) and Dr. Blair Müdfly (Michael Sheen, Good Omens, Prodigal Son) are only the beginning of the forces that stand in Dolittle’s way.

Along the way there will be many obstacles of the fantastic (and not so fantastic) variety – the best of which are Dolittle’s father-in-law (Antonio Banderas, Pain & Glory) and his tiger, Barry (Ralph Fiennes, The Grand Budapest Hotel, Spectre).

Dolittle is fast-paced and packed with gags both vocal and visual (sometimes simultaneously). It doesn’t pretend to be anything but a simple, gleefully goofy entertainment at kids (of all ages) who need a bit of inspired silliness after the wear and tear of overindulging during the holidays.

Director/co-writer Stephen Gaghan keeps things moving briskly enough that it doesn’t really matter if the only character who really has an arc is Dolittle (because he’s the character so obviously in need of one).

The CGI effects are very good both in terms of landscapes and animals (I doubt if anyone can tell whether any of Dolittle’s animal pals are real, CGI, or both).

The end result is pure fun.