Goran Višnji? (Timeless, ER) and Robert Glenister (Law & Order UK, Spooks) will board the TARDIS is the Thirteenth Doctor’s second season – due in early 2020. 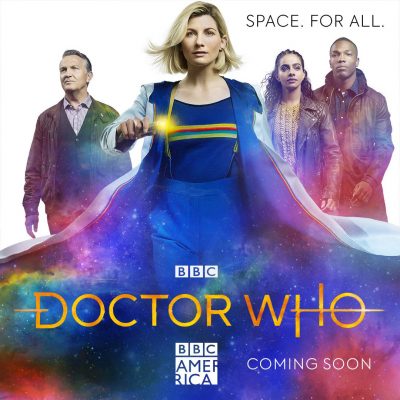 New York, NY – November 22, 2019 – Television and film stars Goran Višnji? (ER, Timeless) and Robert Glenister (Paranoid, Law and Order: UK) are set to appear in the upcoming season of Doctor Who, as the show makes an explosive return in early 2020 on BBC AMERICA. The news comes on the heels of the announcement that Stephen Fry (The Hitchhiker’s Guide to the Galaxy, A Bit of Fry and Laurie) and Sir Lenny Henry CBE (Broadchurch, Harry Potter and the Prisoner of Azkaban) will also be joining the guest cast of Doctor Who.

After previously appearing in Doctor Who over three decades ago, Glenister is no stranger to the TARDIS, while Višnji? will be making his series debut.

Glenister said, “I first appeared in Doctor Who in ‘The Caves of Androzani’ at the tender age of 24 in 1984. 35 years later, I got to be in it again at the not-so-tender age of nearly 60. How time flies!”

Speaking ahead of his debut Doctor Who appearance, Višnji? said, “I’ve always been a huge fan of Doctor Who, so when the offer to play one of my favorite people in history came, it made me so happy to be part of the show and it turned into this awesome, dream job!”

Matt Strevens, Executive Producer said: “One of the great joys of Doctor Who is the legendary actors who want to come and join in the Doctor’s adventures. We were thrilled to welcome Goran and Robert, whose worked we’ve loved and admired for years. They create two iconic characters who are going to delight and entertain.”

Doctor Who will return in early 2020.

Jodie Whittaker will reprise her role as the Thirteenth Doctor alongside Tosin Cole (Ryan), Mandip Gill (Yaz) and Bradley Walsh (Graham), who are all returning for their second season.