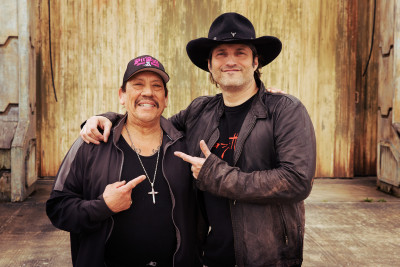 Danny Trejo has joined the season two cast of El Rey’s From Dusk Till Dawn: The Series. He will play a character called The Regulator.

Also joining the cast is Briana Evigan as Sonja – a tattoo artist with an intriguing side business.

Season Two of From dusk Till Dawn: The Series is currently in production.

Austin, TX– March 11, 2015 — El Rey Network and Miramax announced today that Danny Trejo (Machete, Machete Kills) has joined the sophomore season of Robert Rodriguez’s “From Dusk Till Dawn: The Series.”  Trejo has been cast in the roll of “The Regulator,” a horrifying agent of evil who has been summoned to perform a deadly errand.  Trejo appeared in the “From Dusk Till Dawn” film franchise as “Razor Charlie.”

Trejo has had a prolific career in the entertainment industry, yet his road to success has been hard earned and anything but typical, spanning imprisonment to helping young people battle drug addiction, to acting and producing.  Trejo has starred in dozens of films including Desperado, Heat, the From Dusk Till Dawn film series, Con Air, Once Upon A Time In Mexico, the Spy Kids movies, Grindhouse, Machete, Machete Kills, Dead In Tombstone and Muppets Most Wanted.  He can be heard as the voice of Skeleton Luis in The Book Of Life.  Danny’s recent television work includes his first series regular role on the FX show Saint George, as well as an appearance on NCIS: Los Angeles.  He has had recurring roles on Sons of Anarchy and King of the Hill, and has appeared on episodes of Franklin and Bash, Bones, Modern Family, and Breaking Bad.  He has also voiced characters for Cartoon Network’s Young Justice and The High Fructose Adventures of Annoying Orange.  He can currently be seen in the Super Clio Award winning Snickers commercial where he plays the blonde high school student, Marcia Brady.

Briana Evigan (Step Up 2) has also joined the cast of “From Dusk Till Dawn: The Series” as Sonja – an American expatriate working as a tattoo artist in a Mexican Mercado – who also has a sideline forging papers and passports out of her back room.  The returning cast includes: D.J. Cotrona (Dear John, G.I. Joe: Retaliation); Zane Holtz (Holes, The Perks of Being a Wallflower); Jesse Garcia (Quinceañera, Sons of Anarchy); Eiza González (Lola: Érase Una Vez); Wilmer Valderrama (That ‘70s Show, To Whom It May Concern); Madison Davenport (Noah, Shameless); and Brandon Soo Hoo (Tropic Thunder, Ender’s Game, Incredible Crew).

Season one of “From Dusk Till Dawn: The Series” centered on bank robber Seth Gecko (Cotrona) and his violent, unpredictable brother, Richard “Richie” Gecko (Holtz), who were on the run to Mexico when they encountered former pastor Jacob Fuller (Robert Patrick) and his family, who were taken hostage.  Using the family RV to cross the border, chaos ensued when the group detoured to the Titty Twister, a strip club populated by culebras, snake-like ancient creatures who survive by drinking human blood.  They were forced to fight until dawn in order to get out alive.

Season Two explores a new chapter in this supernatural crime saga that travels from Mexico to the edgy, tricked-out Texas of Robert Rodriguez.  It also deepens and complicates the core relationships between the characters, while adding new faces and new dynamics.  Season Two begins with our characters in their separate worlds – Santanico (Gonzalez) and Richie (Holtz) are outside Houston, living like Bonnie and Clyde; Seth and Kate (Madison Davenport) are scraping by South of the Border; and Freddie Gonzalez (Jessie Garcia) is protecting his wife and young daughter in a Houston suburb.  And Carlos Madrigal (Valderrama) and Scott Fuller (Brandon Soo-Hoo) emerge from the Titty Twister, changed men.  They will all come together once again – this time facing off against an even bigger threat.

About Miramax Miramax is a global film and television studio best known for its highly acclaimed, original content. The studio’s new projects include both film and TV, among them the Kevin Hart comedy The Wedding Ringer, which Miramax released in January 2015 together with Sony’s Screen Gems; Mr. Holmes, directed by Academy Award® winner Bill Condon (Gods and Monsters, Kinsey) and starring Academy Award® nominees Sir Ian McKellen (The Lord of the Rings film franchise, X-Men film franchise) and Laura Linney (Kinsey, You Can Count on Me, The Savages), which Miramax will release with Roadside Attractions in the U.S.; as well as The 9th Life of Louis Drax, currently in post-production and starring Jamie Dornan (Fifty Shades of Grey, The Fall), Aaron Paul (Breaking Bad, Need for Speed, Triple Nine) and Sarah Gadon (Dracula Untold, The Amazing Spider-man 2).

Building on its unparalleled library of characters and groundbreaking storylines, Miramax is also currently developing new television series alongside industry luminaries, with projects that include Robert Rodriguez’s From Dusk Till Dawn: The Series, now heading into its second season.
Collectively, the library of more than 700 motion pictures has received 282 Academy Award® nominations and 68 Oscars® with four Best Picture awards, and includes such celebrated independent films as Pulp Fiction, No Country for Old Men and City Of God – as well as scores of commercial hits such as Chicago, Good Will Hunting and Bridget Jones’s Diary.
Since the purchase of Miramax in 2010 by Qatar Holding, together with the investor group led by Miramax Chairman Thomas J. Barrack, Jr.’s Colony Capital, the studio’s world-class global distribution team has successfully brought this renowned collection to existing and emerging platforms in nearly every country in the world.