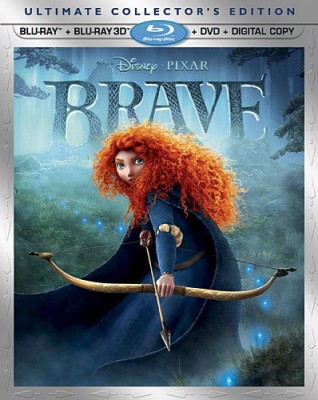 Disney Pixar’s Brave arrives on Blu-ray, November 13th in several different combo packs. We take a look at the 3D, 5 Disc version. Brave will be available on Blu-ray/DVD November 13, 2012.

The main selling point for Pixar’s Brave was the idea that this was the first Pixar film to feature a lead female character.  Princess Merida (Kelly Macdonald) is a long gingered haired tough girl who doesn’t want to face the destiny that her mother Elinor (Emma Thompson) wants for her.

For a screenplay written by a committee of four (Mark Andrews, Steve Purcell, Brenda Chapman, and Irene Mecchi) the material comes off as awful bland and uninspired. Miranda starts off as interesting and lovable but at some point, namely when she puts a spell on her mother she becomes less likable and more of a brat.

Not sure what the ultimate message of this movie is supposed to be. On the one hand it is telling young girls that it is ok to be different and to be who you are but then the solution to the movie ends up being she should have listened to her mother all along. It also doesn’t help that the main villain is a bear that gets talked about but is only seen in the beginning and end of the movie. Leaving the primary conflict between mother and daughter as the sole focus of the movie. 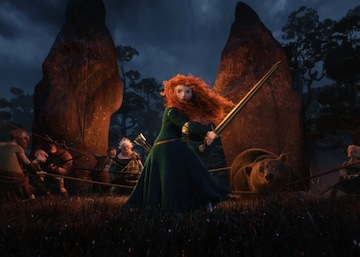 First time Director Mark Andrews and his two other co-directors Brenda Chapman and Steve Purcell, do a fine job with the material they have.  But for former Animators the animation and character designs looked pretty generic and forgettable.  The color pallet used was dull and flat.

There is a new feature called Maximizer which helps you calibrate you setup. Blu-ray is worth getting just for this feature. Audio options include English 7.1, 5.1 and 2.0. French 7.1 and 5.1 and Espanol.  Subtitles are in English, Spanish and French.   The 3D picture is sharp, clean, with no grain, jaggies or anything. 3D doesn’t add much to the experience of watching this movie. There’s not one moment where I thought – man, “I feel really immersed.”   The muted colors of the animation style doesn’t immediately jump on screen.

The top line feature here is that for 5 discs you get the movie in every possible format – 3D Blu-ray, 2D Blu-ray, DVD, Digital Copy and Ultraviolet.

All the extras felt like something the Producers felt like they had to include so they put just the bare minimal amount of work required to produce them.

The packaging is nothing to write home about. It is a standard 4 disc jewel case, but the inserts feel flimsy like they are going to break. 5 discs seems a bit much for such thin material. There’s a Blu-ray bonus disc that has maybe 30 minutes of additional material making the effort seem pointless. There’s a separate disc for each of the various versions. Five discs seems excessive for such thin material. I strongly dislike having the 3D and 2D cuts on separate discs – sometimes watching 3D gets tiring and it is nice to have the option to easily switch to the 2D version.

Menu navigation feels a bit lazy, sluggish and annoying. There’s no pop-up that allows you to easily move from one feature to another. Instead you have to keep go back to the main menu before viewing something else. It makes watching the extras a chore – especially when the payoff is only a two minute clip.

The Blu-ray release suffers from the same thing as the movie a lot of promise that doesn’t reach its potential.  Rent this.