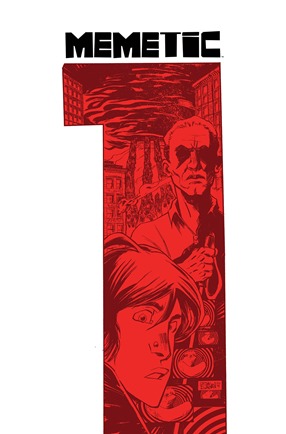 Everyone knows what a meme is. What with I Can Has Cheezburger and Grumpy Cat, and so many others, the idea has become commonplace. But there are nasty memes that get as much circulation as the fun ones, so what if a weaponized meme was released? That’s the premise of BOOM! Studios’ Memetic – a three-issue, oversized miniseries that posits a meme so deadly it could destroy the world in 72 hours. Each issue will cover a 24-hour period.

Memetic is written by James Tynion IV (THE WOODS, Batman Eternal) with art by newcomer Eryk Donovan (In the Dark Horror Anthology, House in the Wall) and premieres on October 22nd. Follow the jump for more details – including ordering info.

July 7, 2014 – Los Angeles, CA – A meme is an idea that spreads rapidly through various social media channels, and is usually something funny and innocuous. It was only a matter of time before a weaponized meme led to the utter annihilation of the human race…in 72 hours, to be exact. Award-winning publisher BOOM! Studios is pleased to announce the new original title MEMETIC, a three-part limited series of oversized issues (each issue covers a 24-hour period) that shows the true terror of the internet. The world will end not with a bang, but with a single online image when creator and writer James Tynion IV (THE WOODS, Batman Eternal) teams up with newcomer Eryk Donovan (In the Dark Horror Anthology, House in the Wall) to bring horror to a whole new generation this October.

“THE WOODS is just the beginning,” said BOOM! Studios Editor-in-Chief Matt Gagnon. “James Tynion IV is one of the brightest new voices to emerge in recent years, and it’s been a flat-out joy to make a home for his original projects at BOOM!. With MEMETIC, James and Eryk show us the destructive power of the internet, a terrifying look at how imagery and ideas can shape the behavior of our culture.”

In MEMETIC #1: A Meme is an idea that starts with an individual, and then spreads to multiple persons and potentially entire societies. Richard Dawkins suggests a meme’s success comes from its effectiveness to the host. But history shows that destructive memes can spread just as rapidly through society. MEMETIC shows the progression of a weaponized meme that leads to the utter annihilation of the human race within 72 hours. The root of this apocalypse is a single image on the internet, a “meme” in the popular sense. A meme that changes everything.

The 48-page MEMETIC #1 arrives in comic book shops on October 22nd with a main cover by series artist Eryk Donovan for the price of $4.99 under the Diamond order code AUG140952. A Meme variant cover will be available in limited quantity. Not sure where to find your nearest comic retailer? Use comicshoplocator.com or findacomicshop.com to find one!

Dear Member of the Press,
Please find below the proper social media usernames should you wish to tag us or the creators on social media when you share this press release. Thanks!

MEMETIC Cover A by Eryk Donovan