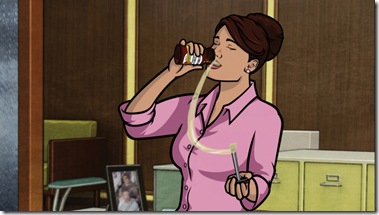 This week’s episode of Archer [FX, Thursdays, 10/9C], El Secuestro, is built around the character of Cheryl/Carol, dim bulb secretary to the self-involved head of ISIS, Malory Archer. It’s an episode packed with unexpected delights and a juicy secret or two.

The episode begins in the allegedly top secret headquarters of America’s third or fourth best [but who’s counting?] intelligence agency, ISIS. Malory Archer’s [Jessica Walter] secretary is late and no one is in a particularly good mood as they rehash some of her blatantly awful excuses for being late every day. Many other shows would probably animate these excuses and they would be hysterical, but on Archer, they’re throwaway lines!

The rest is typical Archer – crass, juvenile, occasionally vile and completely hilarious. The highlights of the ep are many: Cheryl/Carol’s secret phobia; Cheryl/Carol’s secret addiction; Pam’s unexpected baddassery; the value that Malory places on the life of her kidnapped employee, and so much more.

With El Secuestro, we’re ten episodes into Archer’s second season and it continues to be funnier and even smarter/dumber than in season one. Considering that she works for an intelligence agency, for example, it’s amazing that Cheryl/Carol’s biggest secret hasn’t long since been discovered. It’s a prime example of just how self-involved and egocentric the entire cast of the show is that this is so.

It’s odd, too, that I find so much to enjoy in Archer. Usually, shows with no decent, relatable characters tend to not work for me. Curb Your Enthusiasm? Boring! It’s Always Sunny In Philadelphia? Nope! Californication? Sorry? I understand why these shows have devoted fans, I really do. I’m just not one of them. And yet… Archer tickles me.

Maybe it’s because all these grotesque characters are in the spy game, and there’s lots of action [gunplay, sex, blowing stuff up] to counterpoint the characters’ obnoxiousness. Or, maybe, it’s because the writing is sharper than any of the aforementioned shows – and there’s a wickedly satiric edge that actually feels organic. It might even be that employees of ISIS are so completely out of touch with anything that doesn’t directly affect them that they take on an almost mythic quality. Clearly, series creator [and only writer] Adam Reed is some kind of demented genius.

What matters is whether or not the series provokes my laughter. And it does… every week. Go figure.