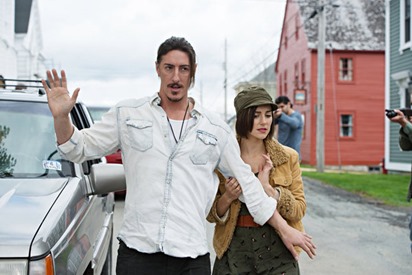 Over its first three seasons, Syfy’s Haven (Fridays, 10/9C) has quietly built itself up as a consistent, weird, high-quality supernatural series – the network’s best series after the soon-to-end Warehouse 13. After a cliffhanger ending that left the town of Haven suffering from a deadly meteor shower and two of its three lead characters disappearing into god only knows where, the series returns with a time-shift, a few answers, new questions and a couple of intriguing new characters.

Fallout opens with the windows of a library being blown in, causing injuries and destruction. The chief of police arrives, with Vince (Richard Donat) and Dave (John Dunsworth) – but the chief is not Nathan Wuornos (Lucas Bryant), it’s town fixer Dwight (Adam Copeland)!

Next we see Duke Crocker (Eric Balfour) being ejected from the mysterious building inside the barn and… into a public aquarium in Boston – inside a fish tank! He finds himself arrested and handcuffed to a hospital bed when he gets a visitor who tells the nurse in charge that she’s his sister (because of the weirdness surrounding his arrest, the arrest was on the news – which she saw).

His ‘sister’ turns out to be Jennifer Mason (Emma Lahana), a young woman who had been diagnosed as schizophrenic after beginning to hear voices in her head – at the same time as Duke and Audrey Parker (Emily Rose) had disappeared into the barn. When she saw him on the news, she realized the voices were not her mind breaking. They sneak out of the hospital (Duke is really good with hairpins) and head to a much different Haven. 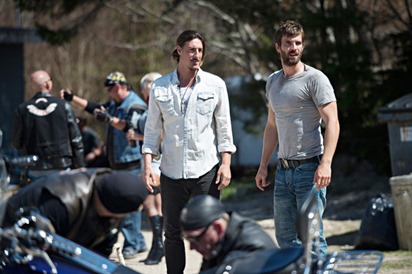 When we finally reconnect with Audrey, she’s waitressing in a bar, not in Haven – calling herself Lexie DeWitt. And the surprises just keep on coming as genial William (Colin Ferguson) introduces himself and things get tense shortly thereafter.

As for Nathan, he’s definitely not in a good way – and that’s all I’m saying.

So now we have a few mysteries: who is Jennifer Mason and how did she become hooked into the barn’s audio; who is William, and how did he know where to find Audrey; what happened in Haven during the six months since Duke and Audrey disappeared? And just who are Vince and Dave, really?

Fallout is well-paced and will have fans on the edge of their seats, possibly screaming at the TV as the ep breaks for commercials. The new situation in Haven is a compelling one. There are life and death situations; a wonderfully dark callback to the first season; unexpected connections and loss of connections; a nasty new attitude for Guard member/diner owner Jordan (Kate Kelton); a payoff for everyone who has wondered just how much do Vince and Dave figure in the town’s hierarchy of power, and that dark and twisty humor that never quite undermines the drama and potential horror of the show.

If series creators Sam Ernst and Jim Dunn really have a seven-year arc planned for the show, we’re just passing the midpoint and the show feels fresh and more compelling than ever.

Photos by Michael Tompkins/Courtesy of Syfy