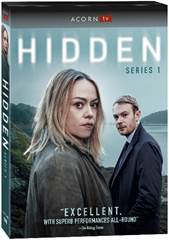 After years away from her isolated hometown, DI Cadi John returns to help her sisters care for their ailing father. Paired with the capable but overloaded DS Owen Vaughan, she soon begins investigating a young woman’s suspicious drowning.

Acorn Media”s Hidden: Series 1 will be released (DVD Only) on November 13th.

“A new gem… I’m practically down on my knees praying for a second season…Riveting.” – USAToday.com

“The story immediately grabs you doesn’t let go… Excellent, with superb performances all-round and the incredible Snowdonian landscape looming large in the background.” – The Killing Times

Nominated for five 2018 BAFTA Cymru Awards, including Best Actor and Best Actress, the international Welsh sensation HIDDEN makes its DVD debut from Acorn TV on November 13, 2018. From the award-winning co-creator and producer of the global hit Y Gwyll/Hinterland, the drama series was filmed back-to-back in Welsh and English. Starring Sian Reese-Williams (Requiem, Emmerdale, Line of Duty) as DCI Cadi John as she investigates the death of a woman in her hometown. The DVD 3-Disc Set features 8 episodes and a bonus behind-the-scenes featurette ($49.99, Amazon.com). The Welsh version Craith premiered on S4C with the English version on BBC One Wales and BBC Four. The English-language version made its U.S. Premiere in July 2018 on Acorn TV. Called a “glorious streaming service… an essential must-have” (The Hollywood Reporter), Acorn TV is North America’s most popular streaming service focused on British and international television from RLJ Entertainment, Inc. (NASDAQ: RLJE).

From the makers of Hinterland comes “a compelling blend of police procedural, serial-killer thriller, and dark mystery” (DigitalSpy.com) set in the beautiful but foreboding mountains of northern Wales. After years away from her isolated hometown, DI Cadi John (Reese-Williams) returns to help her sisters care for their ailing father. Paired with the capable but overloaded DS Owen Vaughan (Sion Alun Davies, 35 Diwrnod), she soon begins investigating a young woman’s suspicious drowning. With bruises on the victim indicating that she was shackled before her death, Cadi realizes that someone is abducting women and holding them captive. When another girl goes missing, the detectives rush to apprehend the culprit before she becomes his next casualty.