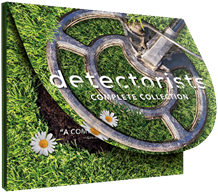 The triple BAFTA-winning British comedy The Detectorists follows two misfit friends and metal-detecting enthusiasts as they scour the English countryside for treasure.

The Detectorists: Complete Collection (DVD only) will be released on November 13th by Acorn Media. Details follow.

‘Best of the Year’ selections Los Angeles Times, The Hollywood Reporter and The New York Times

“Arguably the best television comedy of the year, if not years.” —The Huffington Post

“If you haven’t been watching, you have missed out on one of the most wonderful sitcoms of recent years.” —Times

Resoundingly praised by critics and fans alike, this endearing British comedy follows two misfit friends and metal-detecting enthusiasts as they scour the English countryside for treasure. Budding archaeologist Andy (Crook) muddles through his relationship with his girlfriend, Becky (Stirling), and struggles to live up to the expectations of her imperious mother (Rigg). Meanwhile, hapless romantic Lance (Jones) flounders in the dating pool until an unexpected person enters his life. But even as their hobby provides them refuge from their everyday problems, it also forces them to contend with rival detectorists clubs, double-crossing acquaintances, and development that threatens their favorite fields.

Winner of three BAFTA® Awards for best comedy, best writing, and best actor (Jones) and the Rose d’Or Award for Sitcom, Detectorists is “a remarkable series paying tribute to the glory of unremarkable lives” (The Times).