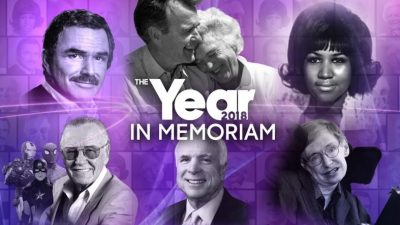 Robin Roberts and Jimmy Kimmel join forces on a one-hour prime-time special to pay tribute to the legendary stars and icons the world lost this year and the legacies they left behind.

The Year In Memoriam 2018 will air on ABC on Monday, December 17th.

For the second consecutive year, “Good Morning America” co-anchor Robin Roberts and ABC late-night host Jimmy Kimmel join forces on a one-hour prime-time special to pay tribute to the legendary stars and icons the world lost this year and the legacies they left behind.

“What I appreciate about the special is you not only celebrate the lives and legacies of these iconic figures, but you learn even more about them through their friends and family. It’s a wonderful way to honor their memory,” said Robin Roberts, co-anchor, “Good Morning America.”